Our Dying Democracy: Not Dead Yet, But on Life Support 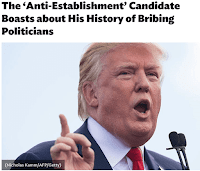 Some political pundits go back to Richard Nixon's appointment of Lewis Powell to the Supreme Court, as the beginning of the end of democracy as we once knew it.

Powell, in 1971, authored the infamous Powell Memo to the US Chamber of Commerce, strongly suggesting that corporate leaders needed to get politically involved and, essentially, take over everything from academia to our court system to our political system.

But Powell's crowning achievement came in 1976, in the Buckley vs Valeo case, where he declared that when rich people or corporations donate to politicians, all that money that got transferred to the them wasn't considered bribery.

Instead, incredibly Powell said the donations to politicians were Constitutionally-protected by the First Amendment-defined "Free Speech."

The right-leaning Supreme Court radically expanded that decision in 2010, with the "Citizens United" ruling.

The results of these rulings crippled our democratic process and opened the door for an oligarchy with unlimited political bribery.

That bribery opens the door to nominating a president, or in electing a president. It doesn't stop there, however. Governors and U.S. senators and congressional members also benefit from these horrible rulings.

Straight up; our current political system is based on paying off major contributors, who want and expect, to get favors for themselves.

Republican politicians and the billionaires who own the corporations are now dropping any pretense at all of caring about the fate and future of our country’s fiscal health, so long as they get their tax cuts Trump promised them.

Our time-honored system of voting is being attacked by foreign powers, and greedy Republicans who are perfectly willing to cheat the system in their quest for more power.

Thus far, the foundations of our democracy are slowing down the attacks from Trump, and his billionaire buddies.

The courts are doing their best to uphold the laws of the land, and the Constitution's guarantee of freedom and justice for all.

It's up to voters next year to reverse this takeover of our democracy. I suspect the majority of Americans don't like what their seeing.