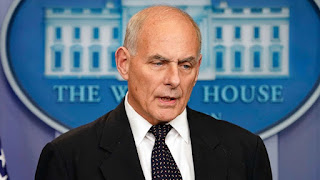 I thought there was at least one adult in the West Wing.

You know I'm not talking about Trump. Everyone on the planet knows he's just a mean man-child by now.

I'm talking about the WH Chief of Staff, John Kelly.

As a Vietnam veteran, I listened to him when he gave that emotional speech about our military dead and he really had me going after hearing that part of him walking through Arlington Cemetery to be with "his friends."

When he made the accusation about Representative Frederica S. Wilson making a speech where she glorified herself and not the two FBI agents the dedication ceremony was about...I hesitated.

Somehow that story, injected between the patriotic platitudes, didn't sound quite right. Why would he even bring it up, I wondered?

The answer came later that day, and the next. The story was bullshit. Certified grade A cow paddy!

A video emerged of her 9-minute speech and proved he made the story up. But why?

That's when I realized there were no adults in the West Wing. He lied to cover up for Trump's bumbling phone call. He tried to turn the story into a partisan attack. To deflect the truth.

I have to admit I was disappointed. I wasn't surprised when Sarah Huckabee Sanders continued the farce and even got a cheap jab in herself.

This whole event stems from Trump's stupidity. As usual. The guy can't sound sincere for the life of him. He should of taken Kelly's advise and not even called.

But Trump doesn't like to take advise. So he called and upset the fallen soldier's widow. When confronted about his call he impulsively lied...it's second nature to the ex-reality star.

Trump kept up the spat this morning like the spiteful man-child he is.

As long as everyone around Trump lies to please him we're going to have endless controversies. Like the last nine months.