Part One: Bob the Cat's Amazing Adventure and New Life 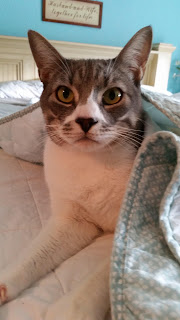 His name is Bob (photo).

They said he was un-adoptable at the cat sanctuary because he would go ballistic if you tried to pick him up.

Tales of his aversion to being touched were passed on to visitors. Some said he was feral.

Bob's chances of adoption were so poor that management was even considering turning him loose in the streets because of the need for more space.

Then Bob's luck changed. His story got to me via my sister Linda. She already had three cats, and didn't want a fourth one, but she wanted to rescue Bob.

Linda called me and pointed out (quite rightly) that I only had two cats, and that I would be saving Bob's life.

I live in Oregon. Linda lives in Southern California. So I flew down with my wife, Shirley, and we got all the necessary paperwork to allow Bob to fly back with us from a veterinarian.

We bought a cat carrier and Shirley picked Bob up with no problems. She talked to him for a moment then put him in the carrier.

This was a surprise after hearing how crazy he was capable of being. Things went well...at first.

We arrived at the airport with Bob in tow, and passed through security. At one point Shirley had to take Bob out of the carrier so they could inspect it for a bomb.

Then she had her photo taken by a PR person from the airline who said they may use it to show how pet-friendly they are.

We boarded the plane with no incident. Five minutes after take-off the terror started!

Somehow, Bob had chewed away a corner of the brand new carrier - situated beneath the seat - and a desperate paw was swatting at Shirley's feet!

Our last of four kitties was an unadoptable at the Humboldt County animal shelter. They said they never put a cat to sleep but that Sheila might be the first. They said she bit a lot (she still bites sometimes).

For seven years, she was Kathleen's little shadow. Then, when two of our male cats died three weeks apart, she realized that she could then sit on my lap with Taffy, who passed on two years later.

For those seven years as Kathleen's shadow, I continued to pet her and was bit beyond belief. Never acting angry, I always was kind to her and now she's my shadow. I think she had been abused, possibly by a male.

It's noble that you took the little kitty. Even unadoptables need a home.