Note to Mainstream Media: Pick a Number and Stick With It! 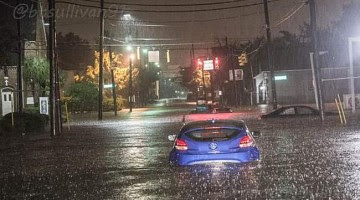 When I first started hearing the reports of a huge rainfall event descending upon the Carolina’s four days ago, some newspapers were saying it was going to be a once in every 200 years downpour.

Within days that prediction vaulted to:

The very next day it went Biblical:

Within the space of four days the predictions went from a 200-year deluge to a 1,000 year calamity! I strongly suspect there was some hyperbole among those frenzied predictions from members of the mainstream media.

No question, it’s been bad, nine deaths have been attributed to the flooding. The downpours and "catastrophic" flooding are expected to persist. But can we take a deep breath here?

There’s no statistical data showing this was a 1,000 year flood. North Carolina governor Haley called it that, but she’s hardly an expert.

Besides North and South Carolina, part of New Jersey, Pennsylvania, Delaware and Virginia felt the storms fury, but none of them vanished into the Atlantic Ocean the last time I looked.

I get it…dramatic headlines get attention, but when you go from 200 to 1,000 years in four days that’s just too much.

Note to mainstream media: Next time pick a number and stick with it. It’s more credible.