A Tale of 3 Adopted Cats and a Dog 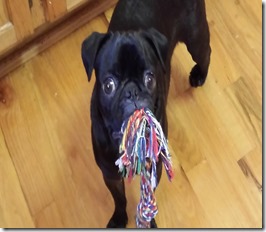 I’m going to start off today with the old adage… never say never!

Two years ago, my wife and I had one dog, Molly, a black pug (photo).

When someone asked me if I was going to get any more pets I said, “No way. Never going to happen.”

As a matter of fact that determination was tested several times. I stood by my guns each time, refusing to get another dog, or cat. But then something happene 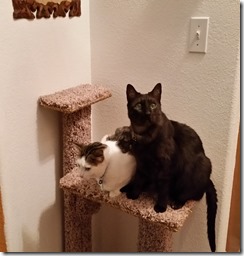 To help out someone we love we adopted two cats. Oliver (Photo), a blind black Persian-mix, and his brother Tommy (photo). Molly meanwhile, gradually learned how to deal with our two new additions over a year’s span.

The animal pecking order became Oliver, Molly, and then Tommy. Because Oliver is blind he has a tendency to slash out when startled and ask questions later. This earned him a healthy respect from Molly who learned to keep a distance from him and to approach him slowly when necessary.

Tom is a l 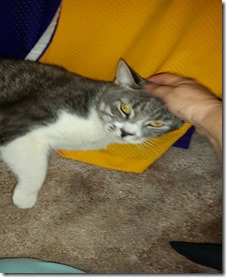 over, not a fighter. His sweet disposition gets him bullied by both Oliver and Molly. Just when things were firmly established in our increased household we found ourselves rescuing another cat.

We call him Bob (Photo being petted).

Bob has lived the first two years of his life hiding under beds and other places and only coming out briefly to eat, drink, and go to the bathroom. The person he lived with was able to approach him and love on him, but the minute someone else entered the room he was gone in a flash!

Bob lives in our walk-in closet right now. We love on him daily, but can’t get him to come out and hang with the rest of the family yet. Bob is pretty hardwired, but we hope that will change. 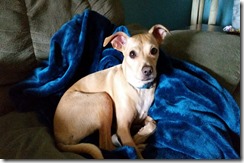 It didn’t stop there. We ended up rescuing a dog in our neighborhood when he was abandoned by his owners. His name is Butters and he’s half Italian Greyhound and Chihuahua.

He’s also one of the sweetest dogs you’ll ever meet. He fit right in with everyone (but Bob) from Day One. So that’s how we became a modern day Animal House and why I never use the word NEVER if I can help it!