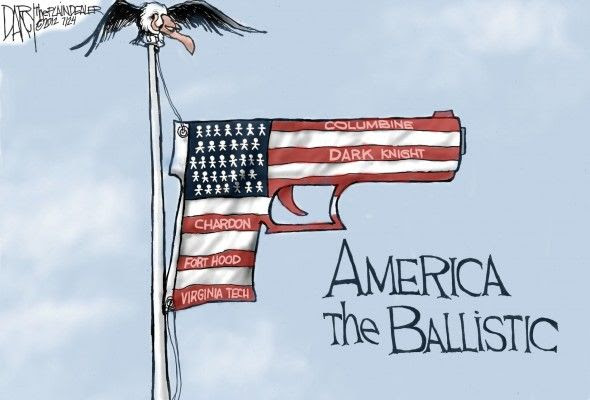 At least that’s what most Republicans want us to think whenever a mass shooting takes place (an average of twice monthly).

The most recent data from the Centers of Disease Control and Prevention found that in 2013 an average of 92 people died in the United States each day of firearm-related injuries.

The day that the mass shooting at a community college in Oregon (October 1st) took place these people were also killed by gunfire:

* A 5-month-old girl was shot to death while riding in a car with her mother in Cleveland.

* A man killed his wife and a good Samaritan, then turned his gun on himself in north Florida.

* A security guard was killed, allegedly by a co-worker in Atlanta.

* Teen-aged brothers were gunned down in broad daylight near a busy intersection in Fresno, California.

* A suspect in a Georgia shooting killed himself after a three-county car chase.

The list of the Oct. 1 dead goes on and on: murders, suicides, workplace violence, domestic violence, street shootings and drive-by gunfire.

But whatever happens, don’t change gun laws because the NRA and the Republican Party doesn’t want to admit that we have a gun problem. They always turn to the “mentally ill” shooters as an example that guns aren’t the problem. Nuts are.

Okay, so why doesn’t the Republican Party take on mental illness and come up with programs to combat it? The reason why they don’t is simple; they don’t like funding any health programs.

Where does that leave us? Watching helplessly as people die every 16 minutes from gunfire because of a murderous ideology that extols the merits of guns while blocking any legislation to make the public safer.