Just as race continues to be a hotbed issue, homophobia is still prevalent in America.

Dire warnings are coming from GOP party members over the Supreme Court’s decision to legalize gay marriage in all 50 states.

Many are framing it as an assault against Christians and American values. To hear them talk you’d think this country is now cursed by allowing equality for all people. 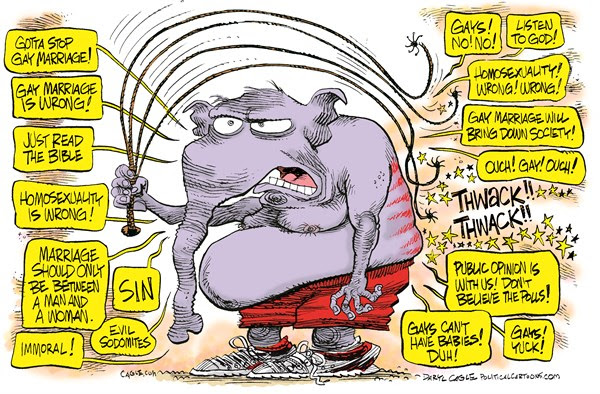 “Today is the worst day in American history.”

“…the decision will pave the way for an all out assault against the religious freedom rights of Christians who disagree with this decision. Marriage between a man and a woman was established by God, and no earthly court can alter that.”

"I will not acquiesce to an imperial court any more than our Founders acquiesced to an imperial British monarch. We must resist and reject judicial tyranny, not retreat."

“Today, 5 unelected judges redefined the foundational unit of society. Now it is the people's turn to speak #Marriage”

“June 26, 2015: the day the twin towers of truth and righteousness were blown up by moral jihadists.”

"As a result of this decision, the only alternative left for the American people is to support an amendment to the U.S. Constitution to reaffirm the ability of the states to continue to define marriage."

"This is only the latest example of an activist Court ignoring its constitutional duty to say what the law is and not what the law should be."

“I fundamentally disagree with the court rewriting the law and assaulting the 10th Amendment. Our founding fathers did not intend for the judicial branch to legislate from the bench, and as president, I would appoint strict Constitutional conservatives who will apply the law as written.”

A Conservative Backlash To Court Rulings Is Coming. Bet On It.