Some baseball fans are professionals at snagging home run balls.

Take Zack Hample (photo above), who is credited with collecting more than 8,000 home run balls and has written books about the art. Zack Hample has snagged 8,149 baseballs at 51 different major league stadiums since 1990. Find out how and see what else he's been up to.Here’s his blog.

“So . . . as you may have heard, Alex Rodriguez’s 3,000th career hit happened to be a home run, and I happened to snag it. (Un-REAL!!) I’m planning to write a long blog entry with lots of photos, but things are so crazy right now that I wanted to get this up quickly.” 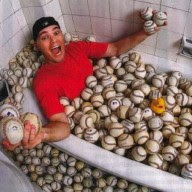 Zack Hample, who's retrieved 8,000 baseballs, won't give HR back to A-Rod

It isn’t easy being a home run ball collector. A few years ago Zack was kicked out of this game:

Ballhawk Zack Hample Was Kicked Out Of Nationals Park Last Night, And He Is Pissed About It

“I was approached by a police officer. He told me he'd gotten a call from someone who reported that I was selling baseballs. I was like, WTF, and told him very calmly that it simply wasn't true and that there must've been a mistake.

Then more cops showed up. Then the head of stadium security showed up, along with his assistant and other stadium personnel.

There were seven of them, and they insisted that I'd sold a baseball, which they told me is illegal to do on their private property.

I told them that I'd snagged more than 6,300 baseballs in my life and never sold one — that I was proud of never having sold one . . . that I once turned down a $10,000 offer for a Barry Bonds home run that I caught, that I'd turned down a $500 offer last year after catching the Mike Trout homer, that I give away baseballs to kids at just about every game I attend, that I've raised all that money for charity, and so on.

I even offered to take a lie-detector test, but they didn't want to hear any of it. They simply insisted that I'd sold a baseball, and they ejected me from the stadium.”

Hample is considered a ballhawk—a member of that fraternity of obsessive dudes who hang around ballparks snagging baseballs. For some reason teams don’t like that – especially when a home run ball by a superstar like A-Rod is caught by a collector like Hample who isn’t interested in selling it!

I see Hample as a super collector, and there’s nothing wrong with what he’s doing. I think his detractors envy his success.