See How They Run! Iraqis Imitate Rabbits When Called on to Fight

I am the Walrus by John Lennon & Paul McCartney 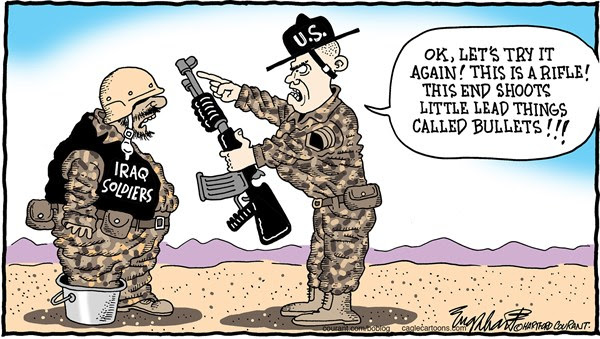 What happens when you declare war against Iraq? They run.

What happens when Iraqis are called upon to defend their own cities? They run.

Ramadi, which was captured by militants a week earlier, is the latest example of Iraqi fighting efficiency.

They were not outnumbered.

In fact, they vastly outnumbered the opposing force, and yet they failed to fight and ran like frightened rabbits. Which has to make an observer wonder if the Iraqis have the will to fight ISIL (ISIS) and defend themselves.

No amount of training and materials of war from America seems to make a difference.

The Iraqi Army leaves behind tons of weapons, tanks, you name it, every time they decide to lift their skirts and run from an enemy.

ISIS should be sending thank you letters to Congress for keeping them well-supplied with the latest in weapon technology.

If Iraq is conquered they’ll deserve it.

My heart goes out to all the American soldiers who served – and died – there. They should have never been put in that hell hole of a country. America failed them, they didn’t fail America.

It’s time to let Iraq do it’s own fighting. If they have the will to win, they’ll prevail. So far, they’ve had the advantage in man power and weaponry – but that’s rapidly changing.

As a combat Vietnam veteran, I can tell you the South Vietnamese DID NOT have the will to fight North Vietnam. We often referred to South Vietnamese soldiers as rabbits because of their propensity to run like hell if enemy fire broke out.

I saw that clearly while I was there. I see it clearly now with Iraq. If only Congress would get it’s head out of it’s ass, they’d see it too!

Posted by ImBlogCrazy at 6:01 AM