Will cops and prosecutors get prison time for trying to set up an innocent man? 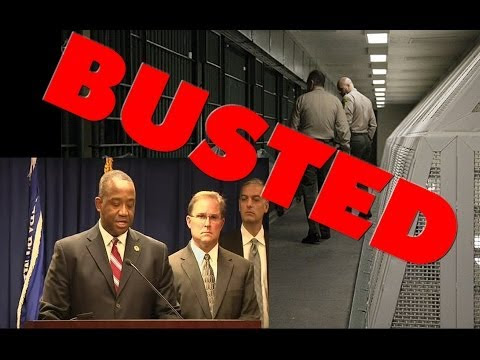 That simple act almost put him in prison.

As New Orleans’ WWL reports, Dendinger’s two-year nightmare began on Aug. 20, 2012. He was acting on behalf of his nephew when he served Bogalusa police officer Chad Cassard with a summons to appear in court. His nephew had filed a police brutality lawsuit against Cassard.

That’s when everything went wrong.

After serving Cassard a white envelope containing the documents, Dendinger went on his way. But 20 minutes later, police showed up at his house and arrested him. He was jailed on charges of simple battery, obstruction of justice and intimidating a witness.

Dendinger was surprised and alarmed, because he knew none of those things really happened. The charges being leveled against him were all lies. Luckily (and unknown to the people setting him up), he had the whole transaction recorded on a cell phone.

Two of those charges were felonies, and a prior cocaine conviction on Dendinger’s record threatened to land him in jail for a long time as a repeat offender.

But he was confident that he would be released without cause since two prosecutors and several police officers had seen him hand over the summons peacefully.

But that’s not what happened.

A year after the incident, then-District Attorney Walter Reed brought charges against Dendinger. His case was backed by two prosecutors who asserted that Dendinger had assaulted Cassard. Seven witness statements also supported the case.

Cassard made the same claim, writing in a voluntary statement that Dendinger “slapped him in the chest” when he served the summons.

Pamela Legendre, a staff attorney who witnessed the hand-off, said she thought Dendinger had punched Cassard.

And another witness said in a deposition that Dendinger used such force when he served the summons that Cassard flew back several feet.

The whole affair was a coordinated effort by Washington Parish, La. cops and prosecutors who falsely accused Dendinger of battery and witness intimidation.

“It wasn’t fun and games, they had a plan, the plan was really to go after him and put him away. That is scary,” Philip Kaplan, the attorney representing Dendinger in his civil rights case, told WWL.

If Dendinger’s wife and nephew had not filmed him that day in order to prove that the court papers had been served, he would have gone to prison for a long time.

Grainy video of the exchange shows Dendinger handing Cassard the summons and the former police officer walking away in the opposite direction.

Though the video aired by WWL does not show the entire encounter, what it does not show is Dendinger slapping anyone or acting aggressively during the crucial moment when he served the summons.

The video also shows that the witness who claimed that Denginger’s force pushed Cassard back several feet had his back turned as the scene unfolded.

After Reed was forced to recuse his office from the case, it was referred to the Louisiana attorney general who quickly dropped the charges against Dendinger.

Rafael Goyeneche, president of the New Orleans Metropolitan Crime Commission, told WWL that after viewing the video he did not see Dendinger commit battery on Cassard and that the officers and prosecutors involved could be looking at serious ethics charges.

“I didn’t see a battery, certainly a battery committed that would warrant criminal charges being preferred,” Goyeneche said.

I’ll be interested to see what happens to those officers and prosecutors. Will justice prevail in the end with all of them serving jail time?

Somehow, I doubt it.

I will let you know what happens Dave. douglasdendinger@att.net