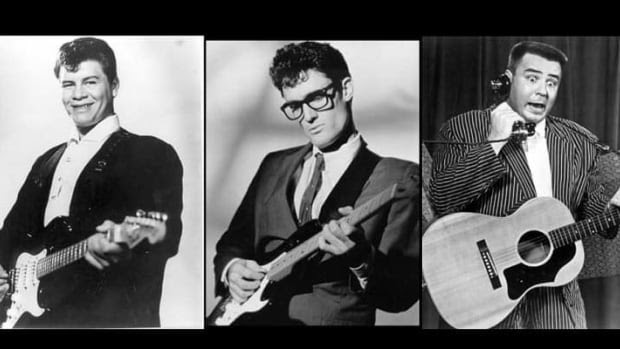 (From left, American rock and roll legends Ritchie Valens, 17, Buddy Holly, 22, and J.P. 'Big Bopper' Richardson, 28, who died in a small-plane crash near Clear Lake, Iowa, in 1959. The National Transportation Safety Board said it was reviewing a petition to reopen the investigation into the crash. Mercury Records)

Why have U.S. Transportation Safety Board (NTSB) investigators re-opened the iconic 1959 plane crash that killed Buddy Holly, Ritchie Valens and The Big Bopper?

The short answer is because the NTSB received a request recently from pilot L.J. Coon to reconsider the decision, according to the Mason City Globe Gazette.

But why does Mr. Coon want the case re-opened?

The original investigation 56 years ago conducted by the Civil Aeronautics Board blamed the crash on the pilot's decision to embark on an instrument-guided flight he was not certified for and, secondarily, on poor weather briefing.

According to NTSB regulations, petitions must be based on the discovery of new evidence or on a showing that the findings are erroneous and not on previously advanced positions.

So why does Mr. Coon want to bring up this tragic event?

Back in 2007 there were rumors that a gun might have been fired on board the plane and the Big Bopper might have survived the crash and died trying to seek help. Those rumors were put to rest in this article.

It seems that Mr. LJ Coon, has made his own investigation into the crash since then.

He believes that the finding of the Civil Aeronautics Board in 1959 that the accident was primarily caused by pilot error amounts to an injustice for Roger Peterson, the 21-year-old pilot who was at the controls of the Beechcraft Bonanza and who died alongside the three musicians.

Coon told the Pilot Tribune this year that “Roger would have flown out and about this airport at night, under multiple different conditions. He had to be very familiar with all directions of this airport in and out.”

Whatever comes out of this renewed spotlight on the accident, the tragedy is certain to continue to obsess rock and roll fans for years to come.

You do know that's not Buddy Holly in the middle, right? It's Gary Busey playing him in "The Buddy Holly Story".