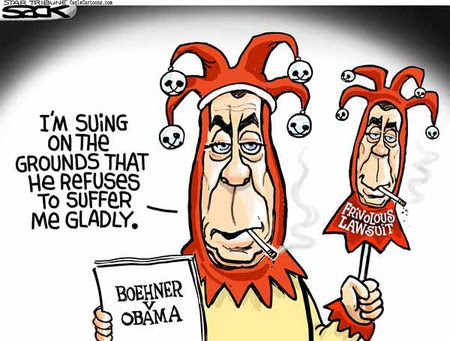 I read this morning that a New Jersey appellate court said a man cannot seek damages for burns he suffered while bowing his head in prayer over a sizzling steak fajita skillet at a Burlington County Applebee's.

The story got me to thinking about other crazy lawsuits that have been in the news over the years. I cobbled together seven unusual lawsuit stories for your consideration.

Let’s start off with the most notorious laws

* In February 1992, Stella Liebeck ordered a cup of coffee to go from McDonalds. Liebeck was sitting in the passenger seat of her nephew's car, which was pulled over so she could add sugar to her coffee.

While removing the cup's lid, Liebeck spilled her hot coffee, burning her legs. It was determined that Liebeck suffered third degree burns on over six percent of her body. Originally, Liebeck sought $20,000 in damages. McDonalds refused to settle out of court.

However, they should have. Liebeck was ultimately awarded $200,000 in compensatory damages, which was reduced to $160,000 because she was found to be twenty percent at fault.

She was also awarded $2.7 million in punitive damages.

* In September 1988, two Akron, Ohio-based carpet layers named Gordon Falker and Gregory Roach were severely burned when a three and a half gallon container of carpet adhesive ignited when the hot water heater it was sitting next to kicked on.

Both men felt the warning label on the back of the can was insufficient. Words like "flammable" and "keep away from heat" didn't prepare them for the explosion. They filed suit against the adhesive manufacturers, Para-Chem.

A jury obviously agreed since the men were awarded $8 million for their troubles.

* In 1992, 23-year old Karen Norman accidentally backed her car into GalvestonBay after a night of drinking. Norman couldn't operate her seat belt and drowned. Her passenger managed to disengage herself and make it to shore.

An appeals court threw out the case.

* In 1997, Larry Harris of Illinois broke into a bar owned by Jessie Ingram. Ingram, the victim of several break-ins, had recently set a trap around his windows to deter potential burglars.

Harris, 37, who was under the influence of both alcohol and drugs, must have missed the warning sign prominently displayed in the window. He set off the trap as he entered the window, electrocuting himself.

The police refused to file murder charges. Harris's family saw it differently, however, and filed a civil suit against Ingram. A jury originally awarded the Harris family $150,000.

Later, the award was reduced to $75,000 when it was decided Harris should share at least half of the blame.

* In 1991, Richard Harris sued Anheiser-Busch for $10,000 for false advertising. Harris (no relation to the above-mentioned burglar) claimed to suffer from emotional distress in addition to mental and physical injury.

Why? Because when he drank beer, he didn't have any luck with the ladies, as promised in the TV ads. Harris also didn't like that he got sick sometimes after he drank.

The case was thrown out of court.

* In 1995, Robert Lee Brock, a Virginia prison inmate, decided to take a new approach to the legal system. After filing a number of unsuccessful lawsuits against the prison system, Brock sued himself.

He claimed his civil rights and religious beliefs were violated when he allowed himself to get drunk. After all, it was inebriation that created his cycle of committing crimes and being incarcerated. He demanded $5 million from himself.

However, since he didn't earn an income behind bars, he felt the state should pay. Needless to say, the case was thrown out.

* In 1996, Florida physical therapist Paul Shimkonis sued his local nudie bar claiming whiplash from a lap dancer's large breasts. Shimkonis felt he suffered physical harm and mental anguish from the breasts, which he claimed felt like "cement blocks" hitting him.

Shimkonis sought justice in the amount of $15,000, which was denied.

Posted by ImBlogCrazy at 7:16 AM