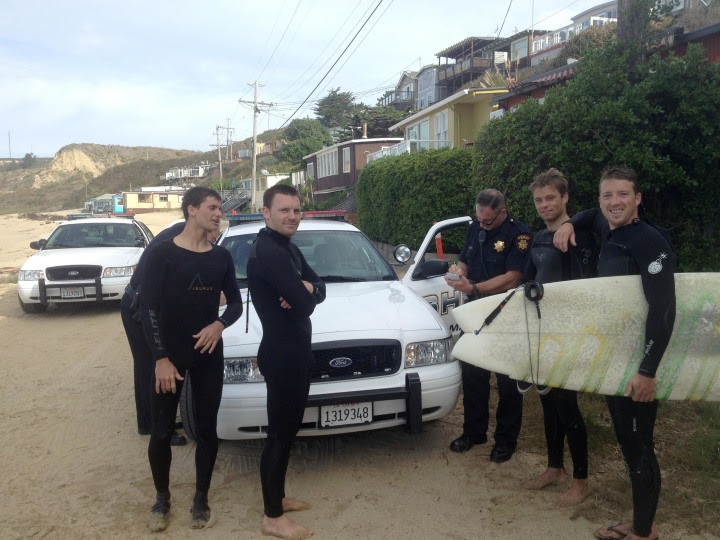 Ever since the Supreme Court ruled that corporations have more rights than citizens in this country, the divide between “Haves” and “Have Nots” has increased.

Millionaires and Billionaires live in a different America than the rest of us.

(Photo -Surfers were arrested in 2012 after bypassing a locked gate to reach Martins Beach in San Mateo County, California.)

In their world it’s okay to deny access to public beaches because they have enough money to fight the laws protecting the public’s rights to them. Putting it mildly, they don’t share very well!

The beach is so central to California’s identity that the right of surfers and sun lovers to access the sand is guaranteed in the state Constitution.

That doesn’t mean anything to the wealthy landowners snatching up beach front properties on both coasts.

Many California landowners want to block public access to their chunks of the coveted coastline. There are several hundred alleged violations pending before state officials, including a highly charged case in which Vinod Khosla, a green energy billionaire with ties to President Obama, is fighting surfers over access to a beach south of San Francisco.

Property owners and the public have clashed over beach access nationwide.

In Hawaii, for example, the state has sanctioned landowners whose overgrown vegetation blocked paths to the strand. But the fight has proven particularly rancorous in California, where two-thirds of the state’s nearly 40 million people live in the counties that hug the coast. (source)

At the rate things are going the day is going to arrive when California’s beaches are no longer accessible to the public. You may think that’s an exaggeration. But consider the current lawsuits filed by the wealthy and the new precedents being set by their legions of lawyers.