Watch the 'Dawn of the Planet of the Pugs' parody preview

My pug, Molly, wants to keep watching a parody of pugs that went viral on the internet. I don’t blame her. Talk about funny!

Imagine a place where pugnacious pugs rule the world.

The latest big-screen installment of "Planet of the Apes" has garnered good reviews .

But it's also spawned a short blockbuster on 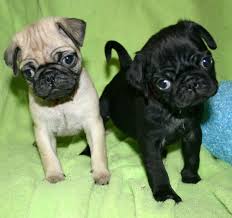 the Web from the Pet Collective, the same group that brought us furry and fashionable memes, a "World Pup" series, as well as various four-legged friends chilling to pop rhythms.

In the YouTube video imitating "Dawn of the Planet of the Apes," the human race may fall because of pug cuteness overload.

Finding a new, genetically evolved man's best friend leads to all the pugs in the forest coming out to play, or pounce.

(Well, maybe not at first; check out the outtakes.) (source /video)