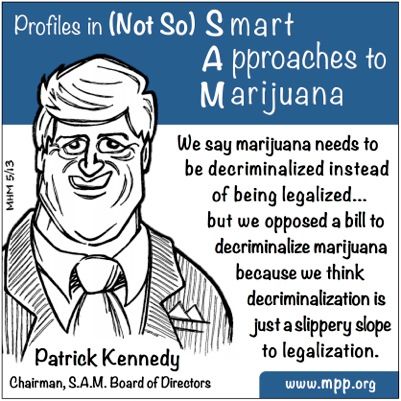 Today we’re going to look at the hypocrisy facing the marijuana industry.

“Last year Kennedy helped found an advocacy group, Project SAM (Smart Approaches to Marijuana), which has been barnstorming the country opposing the growing state and federal efforts to legalize pot.”

You remember Patrick Kennedy don’t you?

“He did several stints in rehab after crashing his car into a barricade on Capitol Hill in 2006, a headline-making event that revealed the then–US congressman for Rhode Island had been abusing prescription drugs, including the painkiller OxyContin.”

Sound familiar now? Nothing worse than he reformed drug addict eh? Especially one who gets financial support from drug companies.

“It’s odd that CADCA and the other groups leading the fight against relaxing marijuana laws, including the Partnership for Drug-Free Kids (formerly the Partnership for a Drug-Free America), derive a significant portion of their budget from opioid manufacturers and other pharmaceutical companies.”

There’s been embarrassing moments along the way.

“After Project SAM began organizing opposition to Alaska's legalization initiative this year, demonstrators in Anchorage paraded a giant check with the figure $9,015—the amount in campaign money that Kennedy received from the liquor and beer lobby while in office.

Critics have also pointed out that Project SAM's board and partners represent many of the interest groups that stand to profit from marijuana's continued prohibition.”

Well, imagine that. There’s financial incentive to demonize weed. Who would of gu

Can’t talk about Kennedy without mentioning the Community Anti-Drug Coalition of America (CADCA). The group thinks painkillers/opiates are just fine, but cannabis will ruin your life. Hypocrites of a feather stick together.

“CADCA's website makes it clear that the organization—dedicated to a "world of safe, healthy and drug-free communities"—has adopted marijuana as its primary concern. The group's stated policy priorities are to preserve and expand two federal drug-prevention grant programs and to oppose marijuana-law reform.

CADCA has hosted training seminars to instruct community organizations in the best tactics for opposing efforts to legalize even medical marijuana. The group also offers template letters to the editor, sample opinion columns, talking points and other tips for pushing back against reform efforts.”

One more thing about Patrick Kennedy:

“Though the former congressman received many second chances in his struggle with alcohol and prescription drugs, he has opposed any move toward marijuana decriminalization that would afford similar leniency to others.”

FACTS TO REFLECT ON

“Prescription opioids, a line of pain-relieving medications derived from the opium poppy or produced synthetically, are the most dangerous drugs abused in America.

Purdue Pharma, the manufacturer of Oxy-Contin, the highly addictive painkiller that nearly ruined Kennedy's congressional career and has been linked to thousands of overdose deaths nationwide.

Prescription opioids, a line of pain-relieving medications derived from the opium poppy or produced synthetically, are the most dangerous drugs abused in America, with more than 16,000 deaths annually linked to opioid addiction and overdose. The Centers for Disease Control and Prevention report that more Americans now die from painkillers than from heroin and cocaine combined.”

Snippets from, The Real Reason Pot Is Still Illegal – Originally appeared July1st in The Nation