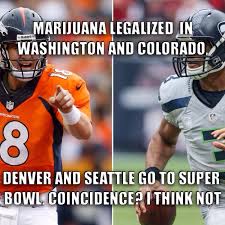 The Super Bowl this year is going to smoke any prior bowls. You can pack that into your pipe and take it to the dispensary!

I’ve been watching for memes and articles on this prospect and found the clever piece below:

“It’s the Super Bowl. Emphasis on the “bowl.” Pack another bowl broham! Hey dude, don’t bogart my stash man. Are you a narc?

With the Denver Broncos and Seattle Seahawks clinching spots in Super Bowl 48, Budweiser’s 1990 notorious ad campaign, the “Bud Bowl,” has taken on a new meaning – the clash of the stoner cities.

As you likely know, earlier this month Colorado became the first state to legalize recreational marijuana; and Washington will be starting its adult-use program this spring. So what he learned about states with lax marijuana laws? They produce conference championship football teams.

Joking of course. This is just a coincidence. But the marijuana friendly Super Bowl is providing more than just fodder for hilarious jokes on Twitter and Facebook. Marketers, publicists, agents, reps from non-profit organizations are all getting involved in capitalizing on this political issue that surrounds the Super Bowl.

Media attention on the Super Bowl has focused on adult-use marijuana laws in Colorado and Washington, but the real story here is that players in those states have had the legal ability for years to access medical marijuana with their doctor’s recommendation, but their jobs deny them that opportunity.

The NFL’s anti-marijuana position as well as the significant changes in marijuana legislation in the last year are issues we all might want to explore in the next weeks of insane media hype and ludicrous social media saturation leading up to the Super Bowl.

After all, these are different storylines from what everyone else is doing. Hey man, can we move the Super Bowl kickoff time up to 4:20 dude?” via Before it’s News