The new year is still young, but that hasn’t stopped three Republican governors from making complete asses of themselves.

Here’s a quick look at the three stooges:

ut in former Arkansas Gov. Mike Huckabee’s case I’m making an exception because there’s rumors he may run again in 2016.

He claims Democrats are pushing women to believe “they cannot control their libido or their reproductive system without the help of the government.” 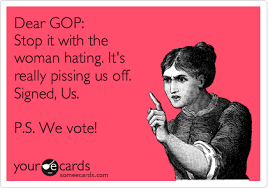 helpless without Uncle Sugar coming in and providing for them a prescription each month for birth control because they cannot control their libido or their reproductive system without the help of the government, then so be it. Let us take this discussion all across America because women are far more than the Democrats have played them to be.”

Oh really? I wonder if women are buying this bullshit? I seriously doubt it. As long as the Republicans have people like Huckabee front and center, they can forget about really reaching out to a majority of women in this country.

Will anyone ever believe he didn’t know about the narrowing of the George Washington Bridge by his staff and circle of friends?

Allegations of withheld Sandy relief funds from the Mayor of Hoboken has drawn the FBI into the case.

Despite going on a firing spree when news got about the bridge’s narrowing for political purposes, Christie hasn’t won over any new converts for his dream of being president some day. As a matter of fact, the latest polls show his popularity is plummeting.

Finally, we have former Republican governor, Robert F. McDonnell, and his wife,

Maureen, who were charged with illegally accepting gifts, luxury vacations and large loans from a wealthy Richmond area businessman who sought special treatment from state government.

Did I mention that McDonnell was once considered a rising star in the GOP universe and there was even talk of a presidency? It never went beyond that, however. Just talk.

Seems all three governors have that in common. A trio of corrupt would-be presidents trying to get into the White House.

So what corporation paid asshole do you want for office? It is time for publicly funded elections.