Playoff Sunday: My Picks & Why 50% of NFL Players use Pot

Tom Brady Peyton Manning, Colin Kaepernick, and Russell Wilson. Four men whose names are going to be cursed or blessed, depending upon if they can steer their respective teams to victory today.

Guts and gridiron. Less talked about, is the pain from a hard season of injuries. How do players today deal with the pain? You may be surprised that sources say half of the players in the NFL use pot for pain management.

Here’s an extensive look at marijuana use in the NFL, by Andrea Kremer of HBO’s Real Sports with Bryant Gumbel . They ask senior V.P. of labor law and policy Adolpho Birch whether a pl 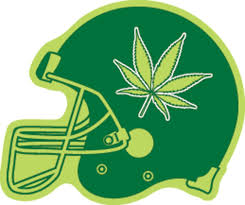 ayer who believes marijuana helps him with pain management and recovery should smoke it?

After more years than I would care to admit of being an armchair quarterback, I have come to the conclusion that the 49er’s will be playing the Broncos in the Super Bowl! Take it to the bank!