Anthill Art: Have you ever seen the lava-encased bodies of Pompeii?

Let’s start the week with some art.

My buddy in Fortuna, California, Carl, sent me a link to a video showing how ant art is created. It’s an amazing process.

I’m reminded of the fate of the Roman citizens in Pompeii when Mount Vesuvius, a volcano near the Bay of Naples in Italy, erupted in the year 79 A.D. It buried the ancient Roman city of Pompeii under a thick carpet of volcanic ash.

In modern times, when archeologists uncovered the city they found people preserved in a thick crust of ash. They were forever frozen in their death agonies. Some still running.

The end result, that coating that brought instant death, was basically the same for humans as it is for the ants covered in a different coating – aluminum. Both human and ants preserved in shells for future generations to behold. Their last agonies recorded for posterity.

One was caused by mother natures fury – Mount Vesuvius erupted; the other by humans sacrificing another species for the sake of art. I have a hard time combining the two into the same category. They’re such different actions.

Art should celebrate life. Not take it for the sake of art. Perhaps I’m making too much of the process it takes to create ant art. The results are stunning original sculptures that capture the eye. 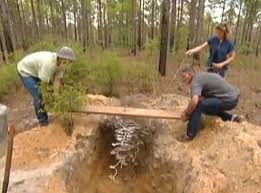 I’ve heard the term “suffering for art sake,” and artists who claim that only through agony and destruction of some kind, can great art be created – phoenix-like - from their imaginations.

I’ve never been that passionate about art, so I don’t understand that. Is it just me, or do the people look like they’re having a good time excavating the ant colony in the photo (left)?

I appreciate art, and how important it is to civilizations and mankind overall. Still, I can see a deep-rooted hypocrisy in a so-called civilized species murdering another species/life form for entertainment.

That guy Carl Young is so awesome, you might consider publishing more of his submissions.