With the Super Bowl a mere eight days away, I have a few items to share that’ll make your day. That is if you’re a football fan. If you’re not, I think you’ll still find some of the following interesting:

Experts are predicting commercials for everything from Greek yogurt to luxury cars will tackle rival brands head-on. Viewers who tune in just for the commercials will see as much aggressive competition as fans following the action on the field.

It’s really going to be competitive this year because more brands are gearing up for real-time feuds on social media channels. Last year’s spontaneous Oreo Tweet after a power outage struck the Superdome in New Orleans was a big wake-up call for marketers about the power of acting - and, more importantly, reacting - in real time.

It remains far too early to pinpoint a forecast for Super Bowl XLVIII, but hints of an active and potentially stormy pattern being in place the weekend of the big game are now beginning to show up on predictive weather models. 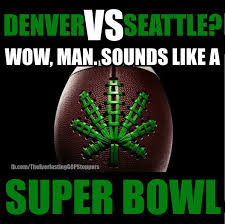 If you’re thinking of going to Super Bowl XLVIII here’s a link to get tickets.

The only two states in the country where marijuana has been legalized for recreational use are sending teams to the Super Bowl this year. The Denver Broncos will face off against the Seattle Seahawks in a showdown that can only be described as made for stoners. The Bud Bowl, Weed Bowl, Hash Bowl - call it what you will, this year's Super Bowl is the game marijuana-enthusiasts everywhere have been waiting for.

The possibilities for marijuana-enhanced food extend well beyond your average pot brownie (which doesn't have to be average at all, in fact). There are cannabis cocktails and no-bake (pun intended) weed cookies. There's caramel "potcorn," mashed "pot-atoes, and "pot chocolate."