‘How cute! I want a dozen of those little brains!’ 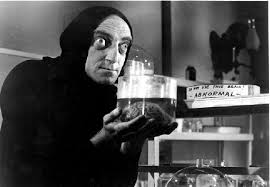 Dr. Frankenstein would have approved.

Mad scientists worldwide are rejoicing! Science fiction writers are smiling smugly and saying “I told you it was just a matter of time.” What is everyone referring to?

Researchers have learned how to grow human brains out of a petri dish! The pea-sized brains (cloned from Republicans) are probably best suited for tiny insect implants, but brains nevertheless! I’m stunned, but probably shouldn’t be. It was inevitable.

When I first heard about stem cells, I quickly grasped they spelled trouble. It was just a matter of time as researchers cloned everything from goats to human body parts. There’s even been talk about cloning a mammoth found perfectly preserved in the frozen Siberian tundra.

The brain, being the most difficult to reproduce, was naturally the last frontier. Are these “minibrains” capable of doing anything? Hint, they were cloned from GOP DNA so don’t expect much from them!

“The first complete living model of the developing human brain has been created in a lab dish. Researchers grew human stem cells in an environment that encouraged them to form pea-size gobs of brain tissue, which developed into distinct brain tissues, including a cerebral cortex and retina.

The minibrains were used to model microcephaly, a human genetic disorder in which brain size is dramatically reduced.” Story here