Mock Combat Veterans: You can’t steal valor – it has to be earned 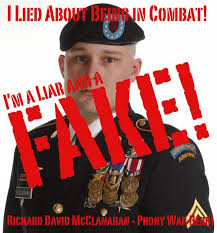 Today’s topic is about stolen valor. If you’re not familiar with the term go here for a complete explanation. I’ll summarize the term for you here: scum buckets who pretend they were war heroes and parade around with unearned medals.

Take a good look at the clown below with the blue tuft of hair. His name is Danny Crane and he lied to people about his military record claiming to be a combat veteran with war wounds. He even called himself the “…most decorated veteran in the state of Florida.”

The problem with that story was Crane only served less than three months in the Army and never came close to combat of any kind. He paraded around in public with two Purple Hearts, a Distinguished Flying Cross and an Air Medal on a Cl

ass A uniform. None earned of course. The good news is he was caught and is spending time behind bars.

Here’s just one example of this clown’s gall; he conned the Department of Veterans Affairs out of $7,000 by claiming he was half blind, had once been shot in the back, suffered from Post Traumatic Stress Disorder and had 24 metal plates inserted in his face.

Unknown to Danny Crane there is a strong network of veterans out there chasing down liars like him.  People like Crane take on these fake identities to impress women, scam federal benefits and reap undeserved praise in their communities.

Enter Guardian of Valor a virtual detective agency ran by Sgt. Fred Campbell, one of 10 veterans who volunteer their time exposing creeps like Crane. There are others too.

Meet Mary Schantag, a Marine widow who lives in Missouri and operates the Fake Warriors Project. Since launching that veteran-vetting venture on a shoe-string budget in 1998, Schantag said her nonprofit group — along with partners at similar sites — has revealed more than 4,000 hoaxers who falsely claimed military service or battlefield glory. It’s unclear how many of those 4,000 frauds later were prosecuted. A VA spokesman said such cases are not tracked by the agency.

Once upon a time there was a law – the Federal Stolen Valor Act – that dealt with scum like Crane, but the Supreme Court last June struck it down.  A majority of justices ruled that invented battlefield brags should be protected by the First Amendment right of free speech.

While I don’t fully agree with that decision, I feel better knowing that there are people out there exposing these fake warriors. The Supreme Court did say that it’s criminal fraud if the mock vets obtain money or gifts from charities or from the government by using their ruse. Mr. Crane was the latest clown to find this out.