Big Brother launches latest attack against your privacy and freedom

Today’s topic is Big Brother, aka our government. Who sends spies in the skies with drones over our amber waves of grain – leaving the battle fields across the planet and now poking their nose in every American’s business.

We all know the Patriot Act took away some of our liberties. They continue to be chipped away by whatever means the government can come up with. As if there isn’t enough real time surveillance in our society, the moles in Washington want to hack our Gmail, Google Voice, and Dropbox in real time.

Privacy is rapidly disappearing for everyone nowadays. You don’t have to be a celebrity or famous. Someone is tracking you as you read this. Somewhere, in the course of your day, strangers will be watching or listening to you. 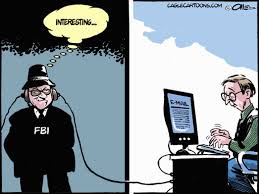 “Despite the pervasiveness of law enforcement surveillance of digital communication, the FBI still has a difficult time monitoring Gmail, Google Voice, and Dropbox in real time. But that may change soon, because the bureau says it has made gaining more powers to wiretap all forms of Internet conversation and cloud storage a “top priority” this year.

Last week, during a talk for the American Bar Association in Washington, D.C., FBI general counsel Andrew Weissmann discussed some of the pressing surveillance and national security issues facing the bureau. He gave a few updates on the FBI’s efforts to address what it calls the “going dark” problem—how the rise in popularity of email and social networks has stifled its ability to monitor communications as they are being transmitted.

It’s no secret that under the Electronic Communications Privacy Act, the feds can easily obtain archive copies of emails. When it comes to spying on emails or Gchat in real time, however, it’s a different story.” (Read the rest of the story here)