Meet groundbreaking blogger Matthew Lee – a slob with a story

Today’s topic is Matthew Lee, a unique blogger and pioneer in digital journalism. He’s sloppy and controversial. My kind of guy. Have you ever heard of him?

He’s an independent journalist whose muckraking coverage of the U.N. earned him profiles in the New Yorker and the New York Times has become a source of tension among the U.N. press corps — though he says he's been unfairly singled out by them because he refuses to conform.

On one side, traditional journalists at the UN have accused M 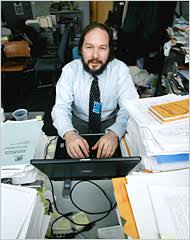 atthew Lee of Inner City Press of making unwarranted attacks on them on his blog and to their employers, and along with U.N. officials, allege that he created a safety hazard with his very messy office (see photo).

Lee was one of the first bloggers ever given U.N. credentials. He's known for his aggressive questioning of U.N. officials, and when he was first accredited, his mainstream media colleagues seemed to respect him. The president of the UN Correspondents Association said at the time, "I don't see any difference in what he's doing and what we are doing."

Personally, I think Matthew Lee is Hunter S. Thompson reincarnated. He’s edgy. Maybe a little crazy. But he sure stirs shit up and is fun to read!