It was really Frank Willis Who Took Tricky Dicky Down!

Todays topic is a security guard named Frank Willis. You probably never heard of Frank. He was just a common guy doing his job when he stepped into destiny’s doorway and doomed the presidency of Richard M. Nixon!

Here’s an interesting take on his fleeting moment of fame from Cracked.com:

“There you are, getting ready for work, brushing your teeth, staring at the mirror, wondering if anyone is going to notice that zit... and then this thought kinda just pops into your head:

‘Today, I'm going to accidentally bring down the American government.’

Never happened to you? Security guard Frank Wills had no early warning either. With a hefty paycheck of $80 a week, Wills might have had good reason to believe he was well out of History's high beams. But in 1972, while patrolling the offices where the Democratic National Headquarters was, Frank noticed that little strips of tape was holding a few doors open. He tore them off. Coming back later, he saw that the tape had been replaced and, deciding that shenanigans were afoot, he called the police. 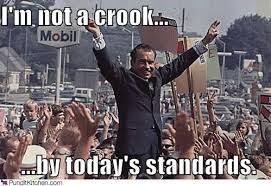 You all pretty much know the rest of the story. The burglars were arrested, tied to Nixon's re-election campaign and eventually, to the President himself. Amidst charges of massively illegal behavior, Nixon finally resigned in 1974, and was beaten to death in an alleyway behind a New Jersey Taco Bell.
No, wait. He became a bestselling author, and lived for years.

Wills, the hard working American who was just doing his job, managed to disintegrate into obscurity almost as quickly as he'd emerged. He played himself in the 1976 movie All the President's Men, but he didn't even get a raise for bringing down the government. In fact, when he left the job because they apparently refused to pay for vacation time, he found he couldn't get work anywhere else. One university told him that they didn't want the government to withhold funding because they'd hired him as a security guard.

Money went fast, and there wasn't a whole hell of a lot of it to begin with. He couldn't pay his electricity bill, couldn't afford to bury his mother, and had to wash his clothes in a goddamn bucket. And not one of those fancy golden buckets. In 1983, he was sentenced to a year in prison for shoplifting a pair of $13 shoes. And that was pretty much it until he died in 2000.”