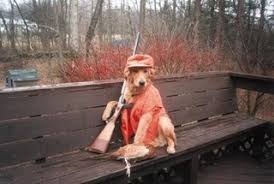 Now and then it’s fun to rip bizarre stories from the nation’s news desks. These two come from Florida, the Sunshine and Gun Enthusiast State!

A Florida man was shot and wounded over the weekend by his dog, who walked away without charges, police said.Gregory Dale Lanier, 35, of Frostproof, Fla., told police Saturday that he and his dog were in their truck in nearby Sebring when the dog kicked a gun that was on the truck's floor, the Highlands Tribune newspaper reported.

The gun went off, shooting Lanier in the leg, Sebring police said.Lanier wasn't seriously injured, said Sebring Police Cmdr. Steve Carr, who actually said police didn't arrest the dog because the investigation was pending, the Tribune reported. He also said he had never heard of a similar case.

According to the police report, Lanier said he was driving along State Road 17 North when the dog kicked "the unloaded .380 pistol." It went on to say that Lanier was "surprised" to learn not only that the gun was loaded, but also that it was actually a 9mm weapon, not a .380.

The incident is only the latest in a string of bizarre shootings in Florida. Just last week, a woman in St. Petersburg was wounded when she was shot by a friend's oven.