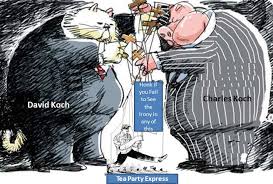 If you live in the Midwest and you're working on a home-improvement project, you're as likely to do your shopping at a Menards store as at a Lowe's or Home Depot. With 270 stores and 40,000 employees , Menards is the third-largest home-improvement chain in the U.S., and one of the largest privately held corporations in the country. But Menards stores sell more than just lumber and building supplies; their employees are sold a bill of goods in the form of right-wing ideology.

This January, as the Iowa Caucuses were underway, Menards began encouraging employees to take an at-home online "civics" course that characterizes the economic policies of President Barack Obama as a threat to the success of businesses such as Menards, and by extension, to the employees' own well-being.

The course, titled "Civics 101: The National Self Governing Will In-Home Training," incorporates much of the material comprising the Prosperity 101 program that AlterNet, working in partnership with the Investigative Fund at the Nation Institute,  exposed last year -- a program concocted by Koch-linked political operatives Mark Block and Linda Hansen, late of the now-defunct Herman Cain presidential campaign. In March, Daniel Bice of the  Milwaukee Journal Sentinel reported that the FBI is investigating possible financial improprieties involving two non-profit organizations founded by Block that are linked to Prosperity 101, which is a for-profit venture.

Menards employees who sign up for the course are graded on their knowledge via a multiple choice pass-fail test, and those who pass the test are acknowledged in company publications and bulletins. While workers are not required to take the course, those who hope for promotions may feel pressure to do so, since it is clear that management is paying attention to who is or isn't taking the at-home classes, which are conducted on the employees' own time. The civics course is offered as part of a battery of courses, most of which pertain to products sold by the company, or other aspects of working at Menards.

AlterNet has obtained the online textbook for the Menards civics course. The third part of the textbook, subtitled " American Job Security ," imparts a message similar to the letter sent by Koch Industries CEO Dave Robertson to retirees and employees of the company's Georgia Pacific subsidiary, as well as the e-mail sent to employees of Rite-Hite, a Milwaukee equipment manufacturer, by company owner Mark White, urging them to vote for Republican presidential candidate Mitt Romney. While the Menards course doesn't offer an explicit candidate endorsement, it describes Obama policies in threatening terms, while policies that echo Romney's proposals are portrayed in a positive and uplifting light. (Read the rest of the story here)