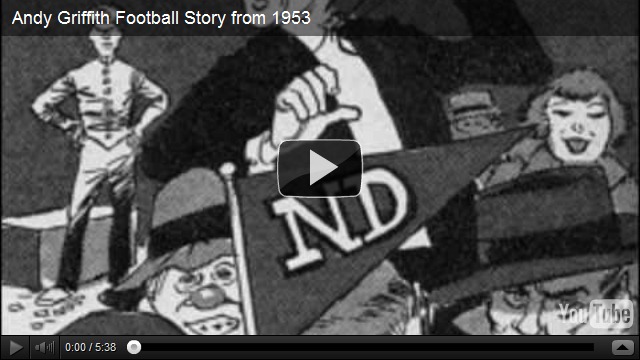 If you’ve never heard this routine, I suggest you give it a listen. The seed for Sheriff Andy sprung from this monologue.

Actor Andy Griffith, who won the hearts of 1960s TV viewers with his role as gentle Sheriff Andy Taylor in “The Andy Griffith Show,” then returned as a folksy 1980s lawyer in “Matlock,” died Tuesday at his home on Roanoke Island, N.C., at age 86, NBC News has confirmed.

Andy Griffith's famous 1953 stand-up monologue about college football has become one of the most beloved comedy recordings of all time. The illustrations used in this video were drawn by George Woodbridge, a Mad Magazine artist. The comic illustration appear in Mad Magazine in 1958. You can view the illustration at: http://www.collectmad.com/madcoversite/missing_was.html

Posted by ImBlogCrazy at 4:33 PM