AS IT STANDS: Move over, ‘Pawn Stars’: Meet the pot stars!

By Dave Stancliff/For The Times-Standard
Reality TV filmmakers will tramp around the hills of Mendocino county this fall, documenting marijuana eradication teams as they bust pot farmers.
How exciting. When California Against Marijuana Planting (CAMP) and local law enforcement come together in their annual waste of taxpayer’s dollars, the rest of the nation can watch (between beer and Tequila commercials) all the action.
Residents of Mendocino County can thank Studio Lambert, a reality television film group which has produced such gems as Wife Swap and Undercover Boss.  Not exactly highbrow TV productions, primarily designed for drooling idiots who actually believe the shows are unscripted.

I shouldn’t have to explain how reality TV programs work. They’ve been around too long for you not to know the formula. Mix just enough reality in with scripted drama to please even the most violent fans.
Cops was one of the first reality shows. The film crews rode along with patrol officers and filmed what happened on their watch. Looking back at that first attempt, the episodes were dull by comparison with what’s offered today in reality TV.
According to an article in the Press Democrat (June 19) Mendocino County will allow the filmmakers access to all the fun this fall. Sheriff Tom Allman and his team of Merry Marijuana Marauders will show the world how tough they are on marijuana growers who break the law, by cooperating with a film studio looking for ratings.

Studio Lambert producers have hit the jack pot. When the six one-hour segments hit the airwaves next year, they will appeal to a growing number of tokers (numerous polls show over 50 percent of Americans think pot should be legal) who’ll watch out of morbid curiosity, if nothing else.
Can’t you just hear the backround music in each segment? “Bud Boys, bud boys, whatcha gonna do when the raiders get you?”
Sheriff Allman, a good man by all reports, hopes this reality show will slow down people wanting to illegally grow in his county. In his interview with the Press Democrat, he brought up how a reality show had helped State Fish and Game’s efforts to reduce abalone poaching on the coast.
All well and good. Marijuana however, is more plentiful than abalone and searching for illegal pot gardens is a lot more difficult due to the vast area and other factors involved. For instance, abalone poachers rarely pack guns. And, as far as I know, no cartels are involved in abalone poaching.
Where am I going with this? Do the stakes get higher now that the Mendocino Marijuana Marauders will be celebrities?
How times have changed. They (law enforcement) used to wear masks with their military looking gear which gave them a pretty fearsome appearance. Like terrorists actually.

I imagine that won’t fly now. Not only will TV viewers see the raiders happy little faces grinning for photo ops, but each one will have to assume a roll. You know, like Austin “Chumlee” Russell in the reality series Pawn Stars?
Sheriff Allman could take on the personality of Richard Benjamin’s “Old Man” who is the co-owner of the pawn shop. The possibilities are endless.
I am concerned that some of the “actors” involved might get a bit carried away for the camera and while looking like Rambo’s twin, may decide to take down a few rascally growers for ratings. Like I said, the possibilities are endless.
I think the idea of county governments using reality TV to help solve their problems is so novel that it deserves spin offs. For example, American Restoration is a spin off from Pawn Stars. 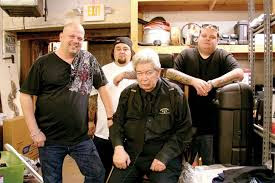 The next one could be about rampant corruption among local politicians in rural counties. Or, wait! How about Homeless in Humboldt with a colorful cast of local characters?
Or, Mendocino Movers featuring a family that has been in the Moving and Storage business for generations. It could tie in with another popular reality show, Storage Wars.
Or they could film Secrets in  Siskiyou County, where old settler families could tell stories about all the usage they had for cannabis crops back in the day when it was legal.
As It Stands, the possibility this reality TV production will discourage marijuana growers is about as likely as Chumlee taking over the Pawn Shop!

Here’s some websites that have picked this column up: