What Not To Do After Breaking Up With Someone Part 1: Don’t Keep Them As Your Dentist 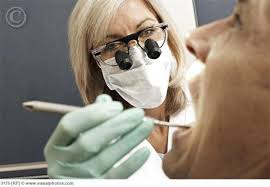 Have you ever looked into someone’s eyes and realized the hamster wheel wasn’t turning? I’ve heard of some pretty stupid breakup stunts in the name of vengeance, but this guy has to be at least four bottles short of a six-pack!

The bar for break-up revenge stories has just been raised. Anna Mackowiak, 34, a dentist in Wroclaw, Poland, is facing jail time after pulling out all of her ex-boyfriend's teeth in a calculated fit of rage.

While this is obviously unacceptable behavior, 45-year-old Marek Olszewski's head is clearly missing more than just teeth, if he thought he could walk into his ex's office without hesitation only days after dumping her for another woman and ask her to work on a toothache!

Mr. Olszewski will have many lonely nights to ponder his actions. His new girlfriend was not cool with the toothless look and has left him. (source)

Posted by ImBlogCrazy at 4:24 PM