Lightning strikes below the belt (yep right there) of unlucky Spaniard…ouch! 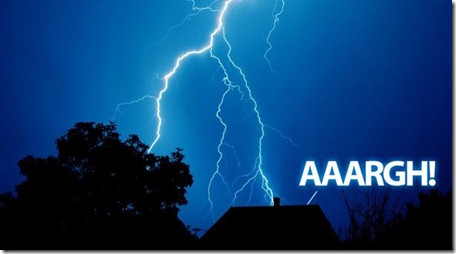 There’s a guy in Spain right now fervently hoping that the old adage about lightning not striking twice in the same place is true.

“Lightning struck a 53-year-old man's scrotum and then exited his body through one of his feet in Madrid, Spain. The good news: he survived. The bad news: his testicles were burned. A lucky man. Or maybe not.

The man was walking on Avenida de La Ilustración—a street in Madrid's suburb Tres Cantos—when the lightning struck his scrotum through his pants, travelled down one of his legs and went to the sidewalk through his foot. He fell unconscious.

His son called the emergency services, who treated the burns on his scrotum and feet. They moved him to the Hospital de la Paz, where he got under several tests. Luckily, his heart and brain were not affected by the lightning, said the doctors.” (source)

Actually, the guy was lucky getting off with just roasted nuts and feet. Talk about a shock of a lifetime. I can just see the poor guy grabbing his crotch every time there’s lightning in the skies. He might want to invest in a shock-proof jock!

Posted by ImBlogCrazy at 2:15 PM