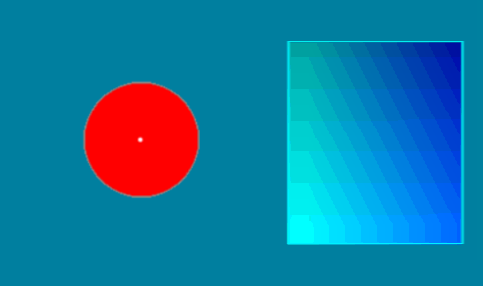 See a new color you’ve never seen before!!…Well… at least never before on your monitor.

It’s a startling example of how poor the green/cyan element is on TVs and monitors generally. The color you are about to witness is actually true Cyan … a color that is heavily diluted on the vast optical illusions 10 majority of monitors (thanks to color pollution). It’s a pity one needs an optical illusion to demonstrate this, but at least you can see what you’ve been missing ;-) Anyway on with the illusion….

Stare at the white dot in the center of the red circle. The longer – the better (two minutes and you’ll get a much stronger effect). Always try to keep focused on the white dot. It’ll be worth it.
Soon after staring, you’ll start to see a thin rim of light around the edge. Don’t stop staring though yet! Wait another minute – keeping your head perfectly still.

Once you’ve done this, slowly – move your head backwards – making sure to keep your eyes focused on the dot at all times. The circle’s rim will glow brilliantly with true Cyan! Keep on moving your head slowly backwards, and it’ll glow very hot!…

The blue/cyan color chart to the right isn’t part of the illusion, but there to demonstrate that the ultra cyan you have just seen is not in the monitor’s color palette! It should be, but isn’t.
It’s an amazing effect. (source)