EAT UP: Eyeless shrimp and fish with lesions on today’s menu 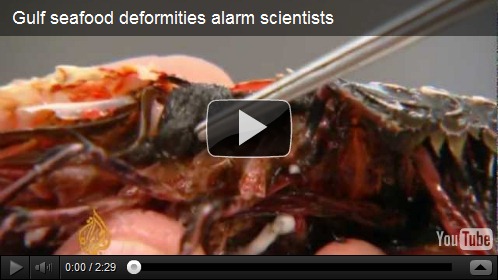 I can’t stand seafood. When I see stuff like this (and people eating it) I gotta shake my head and ask if it’s worth it?

It’s a sad way for a proud country to end. Poisoned by greed, pollution, and politics. We can’t seem to stop killing ourselves.

It’s like a mass suicide. The evidence of our destruction on this planet is everywhere. This Sunday (4/22), As It Stands talks about how we’ve been shitting in our own back yard for too long! We’re paying a price today.

“Americans worry less about pollution in down economy” is a glance at how desperate Americans have become with a flawed food chain and the other consequences of pollution. Stories of pollution have to be epic – like the Deepwater Horizon spill – to keep the mainstream media’s interest.

Now and then, we get updates like the story below (and video above)…reminders really…that we’re in trouble:

“Fishermen are pulling more deformed seafood, like eyeless shrimp and fish with lesions, out of the Gulf of Mexico, and suggest that BP's 2010 Deepwater Horizon spill is to blame. Scientists, however, say they are more concerned about the long-term effects on populations of fish, like red snapper and grouper, than on the potential for making human consumers ill.

The Food and Drug Administration has also insisted that seafood from the Gulf is safe. Still, it's hard to feel assured when you see a black-gilled lobster - and realize the black is from contamination and not a Cajun-style preparation.” (Source)