Happy St. Patrick’s Day To Ya

Our path today is lined with three-leaf clovers, good old Irish blarney, and bit of history. Gather round lads and lassies..tis a fine day to be happy!

“Few St. Patrick's Day revelers have a clue about St. Patrick, the historical figure, according to the author of St. Patrick of Ireland: A Biography.

"The modern celebration of St. Patrick's Day really has almost nothing to do with the real man," said classics professor Philip Freeman of Luther College in Iowa. (Take an Ireland quiz.)

Who Was the Man Behind St. Patrick's Day? 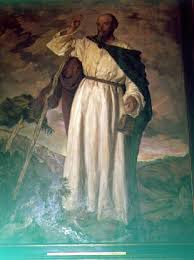 For starters, the real St. Patrick wasn't even Irish. He was born in Britain around A.D. 390 to an aristocratic Christian family with a townhouse, a country villa, and plenty of slaves.

What's more, Patrick professed no interest in Christianity as a young boy, Freeman noted. At 16, Patrick's world turned: He was kidnapped and sent overseas to tend sheep as a slave in the chilly, mountainous countryside of Ireland for seven years. (See Ireland pictures.)

"It was just horrible for him," Freeman said. "But he got a religious conversion while he was there and became a very deeply believing Christian." According to St. Patrick's Day lore, Patrick used the three leaves of a shamrock to explain the Christian holy trinity: the Father, the Son, and the Holy Spirit.

Today, St. Patrick's Day revelers wear a shamrock. Trifolium dubium, the wild-growing, three-leaf clover that some botanists consider the official shamrock, is an annual plant that germinates in the spring. Other three-leaf clovers, such as the perennials Trifolium repens and Medicago lupulina, are "bogus shamrocks," according to the Irish Times.

John Parnell, a botanist at Trinity College Dublin, said that Trifolium dubium is the most commonly used shamrock today, which lends credence to the claims of authenticity. However, he added, the custom of wearing a shamrock dates back to the 17th and 18th centuries, and "I know of no evidence to say what people then used. I think the argument on authenticity is purely academic—basically I'd guess they used anything clover like then."

No Snakes in Ireland

Another St. Patrick myth is the claim that he banished snakes from Ireland. It's true no snakes exist on the island today, Luther College's Freeman said—but they never did.

Ireland, after all, is surrounded by icy waters—much too cold to allow snakes to migrate from Britain or anywhere else. Since snakes often represent evil in literature, "when Patrick drives the snakes out of Ireland, it is symbolically saying he drove the old, evil, pagan ways out of Ireland [and] brought in a new age," Freeman said.

The snake myth, the shamrock story, and other tales were likely spread by well-meaning monks centuries after St. Patrick's death, Freeman said. (source)