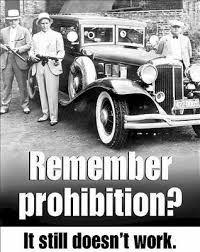 By Dave Stancliff/For The Times-Standard
The War on Drugs was lost a long time ago. The fact that most people don't see the relationship between the war on drugs and alcohol prohibition is one of the greatest marketing feats of the 20th century. 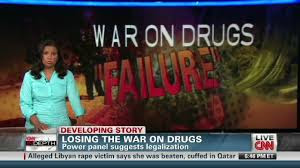 Prohibition doesn’t work. Millions of taxpayer dollars are wasted every year arresting and imprisoning drug users. One of the results is this shameful statistic: The United States has less than 5 percent of the world's population, but it has almost a quarter of the world's prisoners, according to an article in the New York Times: (http://www.nytimes.com/2008/04/23/world/americas/23iht-23prison.12253738.html?pagewanted=all).
Like some grim “Groundhog Day,” people are ignore the unpopular law (like the first prohibition) and become criminals. Jail follows. Soon the jails are overcrowded.
Now, there’s a growing worldwide reform movement challenging current drug laws. Several countries are looking at drug legalization as an alternative to their failed drug policies, despite threats from the U.S. to retaliate.

The reason is no secret. America has been imposing its failed Drug War laws on the rest of the world through economic intimidation. Things are changing, however. Now, world leaders are speaking up to support legal control of all drugs.
Despite U.S. reprisals, some countries have been meeting more frequently, even looking at regional coalitions to strengthen their growing reform movement. Latin American and Caribbean leaders met last December and discussed a regional coalition for drug legalization in what is known as the Tuxtla System for Dialogue ( http://www.world-war-d.com/tag/tuxtla-system-for-dialogue/ ).
Last week, representatives from law enforcement agencies around the world met in Vienna at the 55th United Nations Commission on Narcotic Drugs. (http://www.idpc.net/events/55-session-of-cnd-2012).

The International Drug Policy Consortium (IDPC), a global network promoting objective and open debates on drug policy has a web page (www.idpc.net) with information about last week’s events.
Law Enforcement Against Prohibition (LEAP) - an American organization comprised of active and retired  police officers, judges, prosecutors and other criminal justice professionals - sent representatives Maria Lucia Karam, Jim Gierach, Annie Machon, and Richard Van Wickler, a currently-serving jail superintendent.
In an exclusive interview with Van Wickler ( http://www.leap.cc/some-of-our-speakers/richard-van-wickler-3/) I asked him a few questions about the meetings he attended and his impressions of what happened, or didn’t happen:

Surprisingly, it’s not just liberals calling for an end to this losing war on drugs. Pat Robertson, a provocative voice of the right wing, recently said, “I really believe we should treat marijuana the way we treat beverage alcohol. This war on drugs just hasn’t succeeded.”
As It Stands, the global war on drug prohibition is underway, but U.S. activists for legalization need to continue to lead the way by educating the public, and the rest of the world. 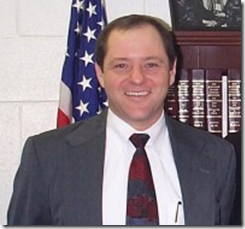 “If prison-building is a national goal, then I suppose that would be a good reason to leave our drug use laws as they are; As a taxpayer and a professional, it is certainly not a goal of mine.” - Richard Van Wickler

As It Stands - “Can you tell me what significant recommendations came out of the March 11th meeting where a drug control framework was discussed?”

Van Wickler - “ Our sense is that every member state of the U.N. is calling for a continuation of the current path of drug-prohibition policy, evidenced by their bland and uninspired discussions of the U.S-introduced draft resolution that would reaffirm the three UN prohibition drug treaties and commemorate the centenary of the Hague Opium Convention.
“Proposed amendments to the US-sponsored resolution and the discussions regarding those amendments basically dealt with form rather than substance.
“Disturbingly, the UN preaches and teaches the importance of a “single and unified voice” that operates to stifle thought, discussion and debate, making the process look more like a totalitarian process rather than a democratic one. A democratic process invites the expression of divergent opinions, beliefs and strategies, and does not dictate a ‘party line.’

The core and threshold issue facing the delegates and the world is whether or not the world should continue the failed UN prohibition treaties and policies?  Woefully, that discussion was stymied and everything was discussed but the elephant in the room.


“These anemic discussions clearly foreshadow the conference conclusion that will reaffirm the status quo, despite the reports by the UN Secretariat reporting the deplorable world situation with regard to drug abuse and drug trafficking, and the UNODC Executive Director’s report detailing a myriad of expensive programs and anti-drug efforts made around the world.
* (1) The cost of those latter efforts were to cost 1.036 billion dollars for the biennium 2012-2013 budget period, or approximately $500 million per year. Drug prohibition is big business.
“In ramming through the status quo drug policies, the discussion of the CND and UNODC officials, delegates and even some NGOs, often repeat the same party-line expressions such as the phrase  “evidenced-based treatment,” “evidenced-based incarceration alternatives,” and “evidenced-based drug solutions” but the evidence overwhelmingly indicts current drug policies with immunity.
“The delegates rightly recognize the long-accepted pillars of drug policy reform that include a need for prevention, treatment, education and law enforcement, but continue to ignore the economic consequences of prohibition that make drugs the most valuable commodity on the face of the earth, which puts more dangerous drugs of every sort everywhere, uncontrolled and unregulated. The missing pillar of an effective drug policy for the world remains the economic pillar. By taking the profit out of the drug business, drug trafficking would be decimated, public health would improve, corruption would be ameliorated, respect for the rule of law and the justice system would be resurrected, and the world’s moral fabric would immediately begin to heal.
“People will little note nor long remember what has been said in Vienna this week, because the thought and content of the conversation avoided the heart of the world’s drug policy problem – prohibition. Al Capone did and would support the United Nation’s prohibition treaties.
“Today, the drug cartels also support the United Nation’s-Al Capone prohibition policies. If the delegates put on their thinking caps, they would immediately recognize that it makes no sense for the UN Member States to be on the same side as the cartels on the prohibition issue. Since the cartels are for prohibition, the ‘good guys’ should oppose it.
“Seeing the United Nations and the Member States delegates in action for the first time, it is stunning to see the complete avoidance of the central issue of drug policy.
Not a single Member State has called for the legalization, control and regulation of the currently illicit drugs. Not a single Member State advocates taking the profit motivation out of the world drug business, which feeds the cartels and terrorists, and corrupts the police and the kids.
“Current drug policy outlaws illicit drugs, but at the same time, by the same rule, tempts the people of the world to engage in the most lucrative business, the drug business. The temptation works and operates to debase society and mankind with devastating effects worldwide. Not only does the war on drugs not work for its intended purpose of saving people from themselves and drug use, but the war on drugs also exacerbates most world crisis.
“The world is fraught with too much violence, too much crime, too much addiction, too many overdose cases, too many prisons, too many bullet holes, too many AIDS cases, and too many bills related to prohibition.
“The war on drugs has proved to be public enemy number one, and yet comes and goes daily to Building M at the Vienna International Center, without the need for a badge, and without question or scrutiny.”
As It Stands - “Were any changes made to the IDPC Drug Policy Guide that you found to be particularly noteworthy?”
Van Wickler - “Because these guides are so comprehensive I wanted to ask the question of Mike Trace who is the chair of the IDPC responsible for this annual report. Mike is also the former drug czar of the UK.
“The 2010 report raised a lot of questions regarding the need for reform. Since the publication of that report, things are moving fast with respect to changes in the prohibition debate.
“The 2012 report contains a lot of changes, most notably that it provides for specific and radical proposals and "steps to take" for member states to consider in the drug policy reform movement.”
As It Stands - “On a personal note, how much has your advocacy for drug legalization affected your       career?”
Van Wickler - “Since I have been a member of LEAP (Dec 2007), my advocacy for drug legalization and drug policy reform has enhanced my career.  Unlike most LEAP members, I am not retired, but still on the job.  I have been in corrections for 24 years, 19 as the superintendent of a NH County jail.
“My superiors are very supportive of my position with the need for drug policy reform.  The NH Association of Counties awarded me with the distinction of being the County Correctional Superintendent of the year for 2011 knowing full well my affiliation with LEAP.  My membership in LEAP contributes significantly to my on going education and enlightenment about National and Global Drug policy.
“My encounter with other law enforcement officers is always positive, and in fact many agree that the drug war is a failure.  Unfortunately they resist the concept, which I believe, is motivated by the "pack mentality" of law enforcement work.
“Not everyone is secure enough in their career or social setting to venture outside of the prescribed focus on current policy. I am. My mantra is ‘it only makes sense if you consider the facts and honor the evidence,’ which is what we in law enforcement are supposed to do.”

Footnotes:
* (1) The 1.036 billion is a bullet by Jim Gierach who sat in on the budget presentation for the U.N. This is for a two year budget, allocating over one half billion to the UN for the next two years for just the office of drug control policy. Obviously there are several other tentacles to the UN which requires significantly more dollars. This figure does not include what will be spent by individual countries fighting the war on drugs.

4) The Times of India