Sometimes the road to romance meets with obstacles. Ask any guy. There are times when your sweetheart says, “I’ll pass,” or, “I have a headache” (an ancient dodge).

The reaction to this rejection sometimes leads to sucking up booze in great quantities to drown one’s sorrows. A new study claims flies react like men in this respect.

“In Friday’s issue of the journal Science, researchers propose a biological explanation for why “Not tonight, dear” may lead to “Gimme another beer.” If it proves true in people, it may help scientists find new medications to fight alcoholism.”

I’m not ready yet to thank thousands of flies for fighting alcoholism. Frankly, I resent being compared to an insect – and especially a filthy fly! I’m calling bull shit on this study, but in the name of fairness, here’s some more information: 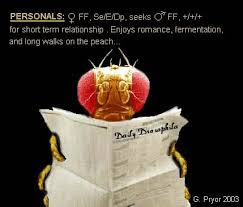 “One by one, these eager Lotharios were put into a container with a female that had just mated. So she was really, really not interested in doing it again anytime soon. She would run away. She would kick the male. She would stick out her egg-laying organ to hold him at bay.

The male flies went through three hour long sessions of this every day for four days, enough rejection to discourage them from trying any more.

After that experience, rejected flies were put in vials and given a choice of regular food or alcohol-laced food. They consistently went for the alcohol more than did the male flies that had just mated. In fact, they evidently got plastered.”

I try hard not to envision the detailed observation of flies part – but I keep seeing a couple of researchers bent over a glass cage holding hands and taking notes! 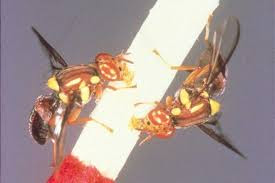 “Some rejected males were moved to a different environment, where groups of guys mingled with receptive females. After the guys had sex, their yen for alcohol declined.

The researchers also paired thousands of other male flies with dead virgin females, so that they didn’t experience rejection but didn’t have sex either. They still hit the sauce.”

Well, I bet they did! There was no way they wanted to hump corpses! This is just all too weird. To think someone paid for this research. I sure hope it wasn’t tax-payers.

“I think it’s a pretty good bet that it will translate to humans,” said Ulrike Heberlein of the University of California, San Francisco, who led the research. If so, “one can say we could now understand why a negative experience, such as a sexual rejection, could drive somebody to drink.”

Posted by ImBlogCrazy at 9:44 AM