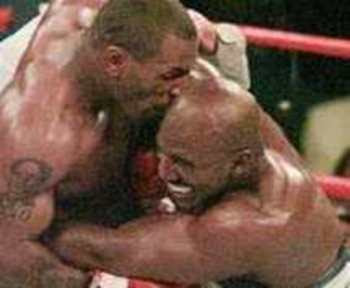 I remember when I coached my three sons in soccer, basketball, and baseball. There was always an irate parent, or coach, who gave each sport a bad name. Adults often get too carried away living vicariously through their children. This is nothing new.

The irony is these kids get the wrong message early – win at all costs! Do whatever it takes. Just bring home a title. I’ve seen and heard of some extreme cases of mayhem by both parents and coaches but was surprised to see the bar is still going up.

Memories of Iron Mike Tyson biting off Evander Holyfield’s ear came back to me when I read this article today:

“A middle school basketball rivalry took a violent turn on Friday, after one losing coach bit off part of another coach’s ear, police said. Police said the assistant coach of the losing team, Timothy Lee Forbes, 34, of Springfield, assaulted the coach of the winning team after a championship tournament game and bit off part of his ear.

Police received a report of a disturbance at the Holy Name School in Springfield during a sixth-grade boys' basketball game.

People at the game pulled Forbes off the coach, police said, and Forbes ran out of the gym before police arrived. The victim, a 34-year-old Springfield man, was rushed to the Baystate Medical Center in an ambulance to have his ear reattached. He has been released.

Forbes has been charged with mayhem, assault and battery and other charges. He will be arraigned on Monday afternoon in Springfield District Court.” (Read NBCConnecticut.com's story on biting coach's ear)

Posted by ImBlogCrazy at 2:52 PM