The good news is about 40,000 American troops are coming home from Iraq, reducing our footprint there considerably.

The bad news; there will be a massive American diplomatic presence for a long time to come.

“The U.S. in Baghdad is the largest in the world, and the State Department will have offices in Basra, Irbil and Kirkuk as well as other locations around the country where contractors will train Iraqi forces on U.S. military equipment they're purchasing. About 5,000 security contractors and personnel will be tasked with helping protect American diplomats and facilities around the country, the State Department has said.

The U.S. Embassy will still have a handful of U.S. Marines for protection and 157 U.S. military personnel in charge of facilitating weapons sales to Iraq.” 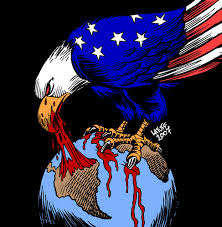 It seems we can’t let go of our eight-year mistake of invading and occupying Iraq. Just another case of American imperialism. Deals have been made and we can be sure of Iraq oil.

We still have Afghanistan and now our warmongering government is turning it’s attention to Africa by sending Green Berets to Uganda in what is the first part of a phased military operation that will spread to other nearby countries.

Once again, the government’s bullshit reasoning for an increased military presence is based upon lies designed to hide our capitalistic goals – there’s oil in Libya – and other natural resources we can plunder. We’re going in – wearing White Hats and all – to save these poor countries from some roving gang of thugs that’s supposedly terrifying the good people in Southern Africa. I’ve heard that song in Vietnam. It’s getting kind of old.

Our Chicken Hawks in the Pentagon are ready to rip Africa apart, like the vultures they are, in order to keep the war machine rolling. Africa screams…but no one hears.

As It Stands, until we pull our troops out from the more than 126 occupied countries, we can’t deny that American Imperialism thrives in the 21st Century.

Posted by ImBlogCrazy at 4:17 PM

I'd like to see this in your TS column. Well said.