What people have to say today in the news…

Here we are again, another day in paradise. Grab a mug of hot coffee or tea and we’ll look through today’s headlines to see what we can see: 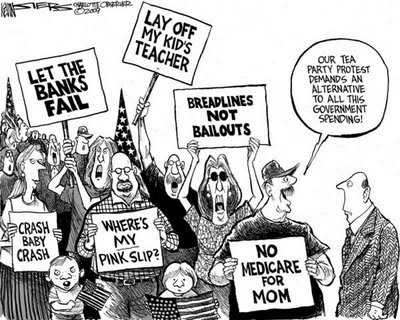 Sen. John McCain railed against "bizarro" alternative plans by "Tea Party hobbits." He said, "What is really amazing about this is that some members are believing that we can pass a balanced budget amendment to the Constitution in this body with its present representation and that is foolish.” cartoon source

Boehner issues blunt warning to debt dissenters He told members of the GOP, “Get your asses in line!”

Atheist Group Wants 9/11 Cross Removed from Museum - Dave Silverman, president of American Atheists, said, "This cross is now a part of the official WTC memorial. No other religions or philosophies will be honored. It will just be a Christian icon, in the middle of OUR memorial.”

Holocaust survivors have issued a "plea" to Facebook to "deny access to their powerful social networking platform to anyone promoting" the notion that the Holocaust should be denied or that it was a hoax. The appeal said,

“We, the undersigned, are Holocaust Survivors who saw our parents, children and loved ones brutally murdered by the Nazis during the Holocaust. We are writing to you to protest Facebook’s policy that categorizes Holocaust denial as “free speech,” rather than the shameless, cynical and hateful propaganda that it is...

Do not permit Holocaust denial any platform on Facebook to preach its inherent message of lies and hate. By allowing this hate propaganda on Facebook, you are exposing the public and, in particular, youth to the anti-Semitism which fueled the Holocaust. Please correct this terrible error in judgment before our generation passes away.”

Time to head on down the road…

Posted by ImBlogCrazy at 7:15 AM