What people are saying about this contrived debt crisis 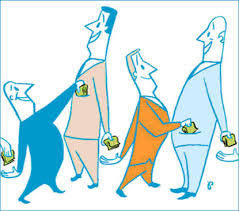 I’ve got to hand it to the assholes/politicians ruining our economy while they play partisan games at the expense of the American middle class; they’ve got a lot of people shook up. Not just here in the U.S., but worldwide.

I hope they’re proud of themselves. They’ve proven to be the biggest collection of corporate crook lovers ever to screw up the House of Representatives AND the Senate at the same time! It’s an all-time low for Democracy. A minority has polarized the majority. Our system has failed. The world can see what’s happening better than the morons who are sinking the system.

I have one question for you: “Do you plan on backing new Tea Partyers to assure maximum damage to our entire democratic system in the future?”

I’d like to think voters will remember what the Tea Party has done here and will prevent their uncompromising climb to power in the years ahead.

Troops ask amid debt crisis: Will we get paid?

The Associated Press interviewed people across the country and found that, whatever their political leanings, frustration about the debt debate itself was the most commonly held view. Voters do not know how the debt showdown got to this point, at the brink, just days away from the United States being unable to pay all its bills.

"Politicians care about themselves, and that's the way it's always been since I was in the military. I'm furious. I hate them.”

"On both sides of the aisle, they all claim to be so smart. So how did we get to this point? It didn't happen overnight. All of these supposedly intelligent people brought us to this point, and now they are scrambling to see who they can take money from."

"They're fiddling while Rome is burning.They're playing to their egos and not thinking about the regular person on the street like me."

"If they don't fix this there will be a lot of people on the street.Things are bad enough already."

At least the tea Party should be required to have a understanding above an eighth grader!