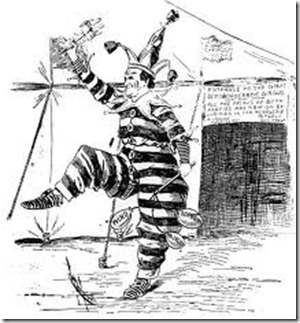 As middle America holds it’s breath to see if the government is going to default on it’s bills, and plunge us into a depression that will make the one in the late 20s and 30s look like the “Good old days,” our politicians are posturing like a pack of clowns in the main ring!

“As Congress and the White House drive the country’s budget and debt rating closer to the edge of a cliff, global financial markets have greeted the impending calamity with a collective yawn.

Something doesn’t quite add up here. Either fears of an economic Armageddon are vastly overblown, or investors are setting themselves up for a nasty surprise.

For now, Wall Street seems convinced that Washington won’t drive the country into a financial abyss.

“We're having a massive circus,” said Robert Doll, chief investment officer at BlackRock Advisors. “It's not going to be fun. In the 12th, maybe 13th hour, we'll get something done. And we move on."

Washington and Wall Street have played this game of chicken before. Following the financial collapse of 2008, Congress balked at approving a $700 billion bank bailout package. The Dow Jones industrial average tumbled hundreds of points, including its biggest one-day point drop ever.” Full Story