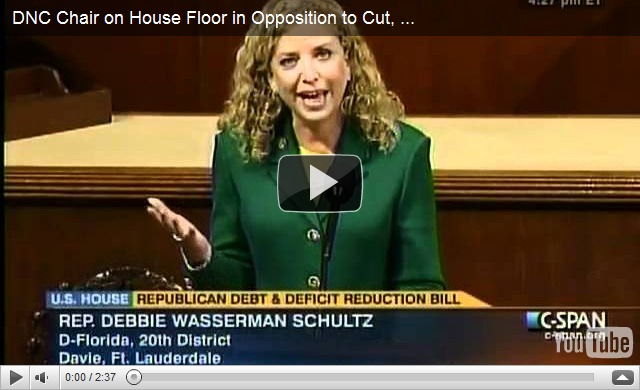 GOP RULES: #1 What’s okay for Republican speakers to say is not okay for anyone else.

“Demeaning to all women.”

Those were just a few of the Republican responses when a congressman accused a congresswoman of not “acting like a lady.”

(See Video to hear  how supposedly “un-lady-like Rep. Schultz is.)

But that was 2010, and it was about attacking Democratic Senator Arlen Spector, after he told Republican Congresswoman Michele Bachmann to “act like a lady” when she was talking over him on a television news show.

The GOP was appalled.  Bachmann claimed she was “stunned by his arrogance.”  The female co-chair of the RNC started demanding an apology Spector’s primary challenger called him out.

Yet when Republican Congressman Allen West of Florida sends an email to House leadership, condemning fellow Florida Representative Debbie Wasserman Schultz for her “attack” on him on the House floor, calling her “vile,” “unprofessional” and “not a lady,” there isn’t a peep to be heard from the party.

As much as Republicans hide behind female politicians to push their draconian cuts and policies that are most harmful to women, then claim that since a woman supports them, they must actually be beneficial, accusing a female politician of not “acting like a lady” is only a crime if that politician is a Republican.  Because, essentially, to the GOP, Democratic women aren’t “ladies.”  They strive for gender equality, they fight for women to be able to work and raise families rather than always choose between the two, they argue for equal pay and the right to have autonomy over their own bodies, families and personal choices.

They fight for women.  And apparently, that just isn’t ladylike.

Florida’s Lois Frankel, who is challenging West for his seat in 2012, responded to the congressman’s sexist diatribe, stating that with his “out of control, rude, sexist and completely inappropriate remarks is it any wonder that Washington can’t get anything done?  We have critical issues from the debt ceiling to creating jobs to two wars; yet instead of getting things done for South Florida families Allen West would rather grandstand and call names that are offensive to all of us.” source

At 12:15 pm ET today, DNC Chair Debbie Wasserman Schultz will hold a conference call with reporters, emphasizing that all the GOP presidential candidates have so far refused to reveal their fundraising bundlers. By contrast, the Obama campaign has revealed its bundlers.