South California as new state? Campaign is on — again 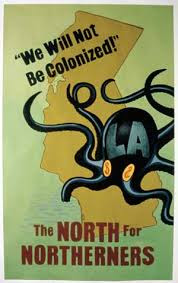 Now a Southern California Republican says it is time to split California in half.

Jeff Stone, a Riverside County supervisor from Temecula, says he wants 13 of the state's mostly conservative counties to break away and become "South California".

Riverside County's Board of Supervisors will consider the proposal tomorrow, according to the Los Angeles Times. If the board approves the plan, leaders will create a framework for secession and then host a statewide summit on the issue.

Stone says as it is, California is an ungovernable financial catastrophe that is forcing businesses to flee and crushing taxpayers with welfare programs.

A spokesman for Gov. Jerry Brown says this is a laughable political stunt.

"It's a supremely ridiculous waste of everybody's time," spokesman Gil Duran told the Times. "If you want to live in a Republican state with very conservative right-wing laws, then there's a place called Arizona."

NBC Bay Area Business & Tech Analyst Scott McGrew says this deal would probably benefit Northern California more. "Housing prices here have been somewhat more stable," said McGrew. "The state is able to get more money from stock gains here thanks to tech and we have smaller numbers of people in entitlement programs."

Posted by ImBlogCrazy at 5:03 PM