Comments on some of today’s headlines…

I read where a grief-stricken Hamid Karzai climbed into his assassinated brother's grave this morning. I have one observation to make, “Someone should have hurriedly filled it up when he was in there!

I’m not thrilled with the Fed's new money policy: 'Wait and see'

Fed Chairman Ben Bernanke was on Capitol Hill today testifying on the central bank's latest strategies for getting the economy back on a stronger footing.

Is it just me, or does this sound like a scene out of “Fantasy Island” where everything magically works out by the end of the episode?

File me under, “Paranoid to fly these days.” When I see things like Scientists questioning cancer risks from exposure to full-body scanners, I add that to a growing list of concerns.

Budget talks between President Barack Obama and his GOP rivals are at a frustrating standstill, leading a top Republican to launch a long-shot proposal to give Obama sweeping new powers to muscle through an increase in the government's debt limit without the approval of a bitterly divided Congress. If that happens I’ll start believing in the Easter Bunny and The Great Pumpkin.

Watching the Murdoch empire crumble has been the highlight of the week thus far for me. Now investors are asking what might be the broader impact on Murdoch’s global News Corp. empire, which includes the Fox broadcast network, cable channels such as FX and Fox News, television stations, the 20th Century Fox movie studio and newspapers around the world, including The New York Post, The Wall Street Journal and The Sun in the U.K.

"This is going to have ripple effects over in the U.S., too, but it may take a while for it to all play out," predicted newspaper analyst Ken Doctor of Outsell Inc. Republicans throughout the country are probably really concerned their going to lose their “Voice,” on national TV (Fox execs are hiding beneath their desks waiting for the outcome) under the guise of a real news affiliate. 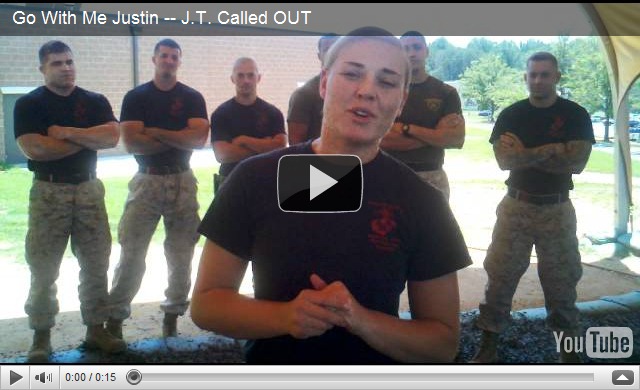 Can you imagine what would happen if Justin tried putting a move on Cpl. De Santis when she wasn’t interested? She’d kick his ass all the way down the Halls of Montezuma!

Not to be outdone, a female Marine wants a date with Justin Timberlake

After Justin Timberlake nudged Mila Kunis into accepting a Marine's invitation to be his date for the Marine Corps Ball, another Marine had a similar idea: put Justin Timberlake on the spot, too. Cpl. Kelsey De Santis, currently serving as the only female at the Martial Arts Center for Excellence at Marine Corps Base Quantico, has made a YouTube video inviting Timberlake to be her date for the Ball, taking place Nov. 12 in Washington, D.C.

Can you imagine what would happen if Justin tried putting a move on Cpl. De Santis when she wasn’t interested? She’d kick his ass all the way down the Halls of Montezuma!