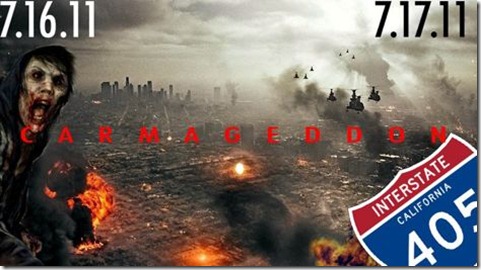 It’s time to check out a few headlines and to have a cup of coffee, or tea. Relax. You don’t have to face the traffic in LA this weekend.

City of Angels braces for its 'Carmageddon'

The City of Angels is on edge as the hours tick off until "Carmageddon" — the shutdown of a 10-mile stretch of one of the busiest highways in the United States, on one of the city's busiest summer weekends.Will it bring traffic to a standstill like a scene out of a summer disaster movie? Or fail to come to pass, like other apocalypse predictions?

The calls came as soon as Shaquille O’Neal(notes) decided to retire, all wanting to hire one of the NBA’s greatest entertainers.TNT’s “Inside the NBA” studio show had been O’Neal’s favorite as a player, so the choice was easy.

Get ready for the Big Analyzer, Big Commentator, or whatever other nickname he takes in the next phase of his career. O’Neal agreed Thursday to a multiyear deal with Turner Sports to become an analyst on its NBA coverage, where he will fold his 7-foot-1 frame into the fourth chair on the TNT set alongside Charles Barkley, Kenny Smith and Ernie Johnson.

This monster croc weighs about 2000 pounds and is 18 feet long!

The giant croc – his name is Brutus - shown in this video is said to be over 70 years old. He lost one of his front legs in a fight with a shark. He’s 18 feet long, but is not the dominant croc in the area. That honor belongs to the “Dominator” who is over 20 feet long! This is one tourist attraction I’d pass on.

Time to head on down the road…