Owl imprint on windshield, exorcists meet to tackle vampires, and say hello to the friendly ‘Fracosaurus’ 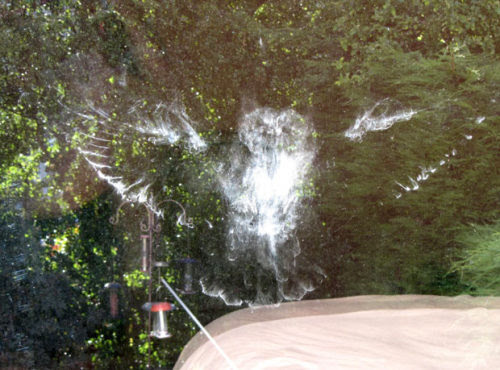 Grab a cup of Joe while we go through a few headlines this morning:

An imprint of an owl is left on a window pane after the bird crashed into the window. Sally Arnold returned home to Kendal, Cumbria, and found the huge imprint complete with eyes, beak and feathers on her bedroom window. The silhouette was left by the bird’s ‘powder down’ - a substance protecting growing feathers.

Vampires, the devil's deceit and mental illness are among the hot topics for some 300 exorcists who flocked to Poland this week from as far away as Africa and India for a week-long congress.

Held at Poland's Roman Catholic Jasna Gora monastery, home to the venerated Black Madonna icon, this year's congress "examines the current fashion for vampirism in Europe and the world-over, schizophrenia and other mental disorders as well as the devil's deceit during exorcism," according to the monastery's radio station. rgy Adventure" is no longer being distributed following a barrage of criticism.

Critics called the coloring book's depiction of land before and after drilling overly rosy.

The post-drilling image adds a rainbow and an eagle to the scene where the hydraulic fracturing drilling process took place. U.S. Rep. Ed Markey mocked the depiction of the "friendly Fracosaurus" in remarks last week on drilling safety. Colbert spoofed the book earlier this week.

Posted by ImBlogCrazy at 9:25 AM

Dave
The owl print is real. Years ago, when we owned the sears catalogue store in Garberville. The fright driver showed us the print of an owl on his windshield. He had run into it on his way across 299. It looked similar to the Harley Davidson eagle with up-stretched wings.