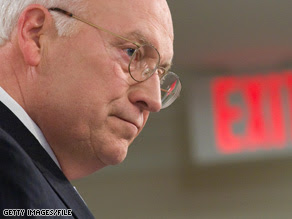 It looks like “Darth” Cheney is pulling out all the stops to get Obama to not name a special prosecutor. Despite his “factless” story that torture saved the US from terrorists, it looks like it’s time for some people to pay the price for breaking American laws on torture. I would love to see Cheney do some time for his part!

(CNN) — Former Vice President Dick Cheney is again taking aim at President Obama, issuing a statement Monday suggesting the administration's decision to name a prosecutor to investigate CIA interrogations under President Bush fuels "doubts about this administration's ability to be responsible for our nation's security."

"The people involved deserve our gratitude," Cheney said in the statement. "They do not deserve to be the targets of political investigations or prosecutions."

to read the rest.