Fast-tracking another appointment? Geithner getting Pass? 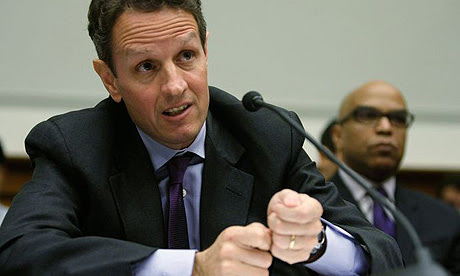 Let me see now. Roland Burris gets the green light from a corrupt governor to be the next senator from Illinois (filling Obama's old seat) and every Democratic (and of course Republican) senator said they wouldn't let him take a step onto the senate floor.

Obama quietly passes the word to senator Reid and suddenly Burris is golden and being hailed as the next senator from the great state of Illinois!

But that's yesterday's news. How about having a Treasury Chief that didn't pay several years back taxes?

Better yet, how about a Senate Finance Committee that is fast-tracking his confirmation? One senate Republican blocked it temporarily, and it doesn't look like he's going to be confirmed during Obama's inauguration.

The feeling among the "good ol boys" on the committee is, "What's a measly $34,000 in back taxes?" They've been grinning happily for the cameras and talking about "honest mistakes."

Gee, I wonder if I failed to pay $34,000 in back taxes if the IRS would think that's okay? Somehow, I don't see getting any special treatment like this Gaithner has. And he's going to head up the IRS! This guy is supposed to be such a financial genius, but he can't even keep track of his own finances? What about knowing financial laws? His people say there was some question on whether he even had to pay taxes while working for his last job. A question that Geithner couldn't answer? That sure doesn't bode well for our new financial guru!

Can you say, "double standard?" Doesn't it feel good to know that whoever runs this country one thing isn't going to change? I'm referring to political corruption, the backbone of our capitalistic society.

AS IT STANDS, I guess that's why I smile every time I hear all of this talk about "change" coming to America. What a laugh!

I love our "double standard" in America...forgive and move-on seems to be the buzz words for this new administration.

Needless to Dick Chaney, Heir Karl Rove, GW and the rest of the gang...the'll be forgiven

However, many American won't forget.