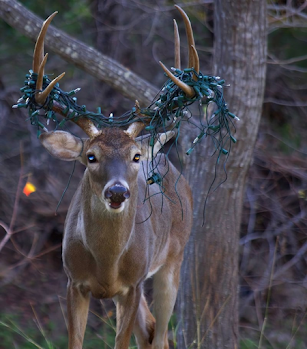 Have you got the holiday spirit yet?

As the unofficial (and self-appointed) sage of Oregon I hope good times are ahead for you this festive month.

Not a lot of things happen here in Oregon. We're kind of a bland state with no major theme park and a lot of rural area divided up between warring counties.

Our state motto is Alis Volat Propiis, which is Latin for "boring state!" No seriously, it means "She Flies With Her Own Wings." Whatever the hell that means.

A buck with its antlers covered (photo top of page) in Christmas lights was spotted in city of Dallas (15 miles west of Salem) advertising Christmas.  Or at least that's what the locals thought at first but then some wit noted the bulbs were not flashing!

Putting one plus one together they soon discovered the buck had gotten accidentally tangled up in someone's yard display and was in distress... not drunkenly celebrating the holidays.

Did you know we're the only state that has a depiction of the state seal on one side of its flag and its motto on the other? A two-faced flag.

Oh yea! This is a holiday greeting post. Do you like to ski? The Ashland Ski resort opened early this year and Christmas parties have started in the resort's Lodge. The same is true for the dozen other ski resorts in the area.

Here's a list of the Top Ten Ski Resorts in Oregon according to Expedia this season.

Local lore says Santa stops by ski lodges occasionally throughout December. Or Bigfoot. It just depends on who you're talking with.

Oregon's rivers and forests are the stuff Holiday Greeting cards are made of, with snow covered landscapes and sleigh riding revelers dashing through the countryside.

You may wonder why I've become the state's unofficial Sage. The answer is simple. Like me. No one else wants to!

As it stands, full disclosure: I wasn't born in Oregon I've only been here for ten years. That doesn't stop me from opining about my adoptive state, however.