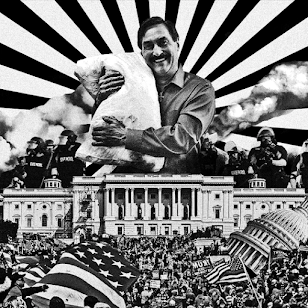 Mirror, mirror on the wall who is the craziest of them all?

With that kind of a credential, he should be a shoo-in to lead the National Republican Party into darker conspiracies for the deplorable base who demand crazier things daily.

Trump just endorsed him for the Republican National Committee leadership over Ronna McDaniel (a minion who somehow fell out of Trump's grace).

It's a match made in hell that will make the slim majority of Republicans in the House of Representatives more toxic. With Lindell calling shots on a national scale, it would be something right out of the old TV series The Twilight Zone.

But you know what? It just might be a good thing... for the democrats.

Think about it. With Lindell leading republicans down the yellow shit road, it can only mean disaster for the cult's (they call themselves republicans, but we all know better) 2024 election prospects.

Americans showed they were weary of right-wing maggots' antics in the midterms. So, it's only reasonable that two more years of bat shit crazy republican antics (on steroids with My Pillow fascist Lindell) would only enhance sane Americans desire to vote for democrats in 2024.

Then there's the entertainment value.

What will Lindell do or say today?

Where in the world is Lindell? (Hint, follow fascist rallies around the country)

Who will be called vile names and put on Lindell's daily shit list?

Witness the lengths Lindell reaches when attacking computers and machines in every other sentence. Machines are bad and they're a threat to humanity in the My Pillow creep's world.

Best of all, what a show it would be watching republican lawmakers trying to avoid a complete split from reality but too afraid to go against Trump's political puppet.

They would have to wear sneakers in the corridors of Congress to outrun and avoid reporters. Some of the older one's may have to get rocket-powered wheelchairs to stay ahead of the inquiring media.

Beginning to get the picture?

As it stands, if you happen to know some republicans (family, etc.) encourage then to support the My Pillow guy. He might even give them a discount on their pillow purchases!